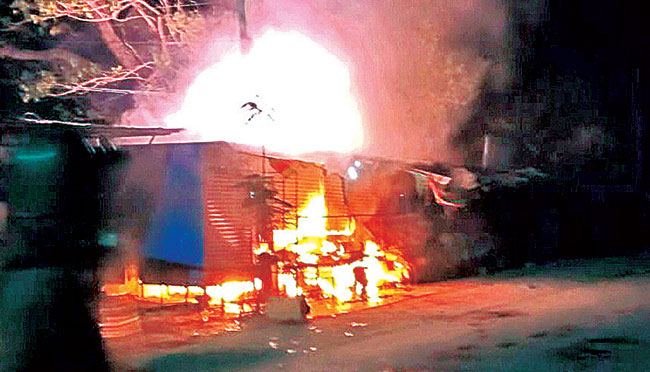 Bhainsa town in Nirmal district of Telangana witnessed a tense atmosphere as violence flared up again. On Sunday, a small dispute in Zulfikar Colony soon escalated into a major conflagration and spread to other parts of the town. Going into details, around 7.30 p.m. on 7-March, few youth were driving around in noisy motorcycles whose silencers were removed.

This led to residents of the colony questioning them. The youth were told that farmers, agricultural workers were taking rest after a hard day’s labour and they were asked not to go around creating huge noise through silencer-altered bikes. This led to two groups of people attacking each other. Soon the violence spread to Batti Galli, Panje Sha Chowk, Korba Galli, Town Bus Stand and other areas.

Youth belonging to one section burnt down two auto rickshaws, one car and two two-wheelers belonging to the other group. Brandishing swords, they roamed freely in the colony. Few houses and one vegetable shop were burnt down. Media persons who went to cover the violence were attacked with swords.

In this attack on journalists, Deva, Vijay and Prabhakar from Andhra Jyothi, Eenadu and raj News respectively were injured. As the first two journalists were injured seriously, they were rushed to Nizamabad district HQ hospital. In stone pelting, one police officer and two constables were injured. 4 other youth were also injured.

The injured were shifted to local area hospital for treatment. By 10 p.m. entire town witnessed a tense atmosphere. Additional police reinforcements were rushed to the town and steps initiated to control the rampaging mobs and bring the situation under control. District administration officials also rushed to the town to take stock of the situation.

He warned that police should not succumb to pressure from higher ups in the government and work to protect one section of the society. He demanded immediate action to completely stop violent incidents in the town. He accused that the government is pampering to one particular community and this is the root cause of frequent incidents of violence in Bhainsa town and the present government should take full blame for repeated violent incidents happening in this town. He suggested shifting of all the injured to Hyderabad for better medical treatment.

To support Hindu victims who lost their properties,  Sevabharati extended its help by collecting the funds and held a Bhoomi pooja for the construction of permanent house.  Sevabharati Telangana to construct houses for Hindu families who lost their homes due to attack by Islamist mob in Bhainsa

1 thought on “VIOLENCE FLARES UP AGAIN IN BHAINSA, YOUTH ROAM AROUND BRANDISHING SWORDS”