Nijam Today’s investigation found that except a few, none of the Indian entities receiving funds from the Rahbar Foundation is registered with the Ministry of Home Affairs under the provisions of the Foreign Contribution Regulation Act, 2010 which is mandatory for NGOs to receive foreign funds.

A frequent sight on the roads of Hyderabad is push cart vendors going about their business with the banner ‘Donated by Rahbar Foundation’ mentioning the foundation’s  website address. As per the foundation’s website (www.rahbarfoundation.org), it is located in the USA at the following address –  2436 KENT DR, Irving, Texas, 75062. The foundation is USA 501 (C)(3) approved non-profit charitable organization with Tax-exempt ID: 47-3151781. 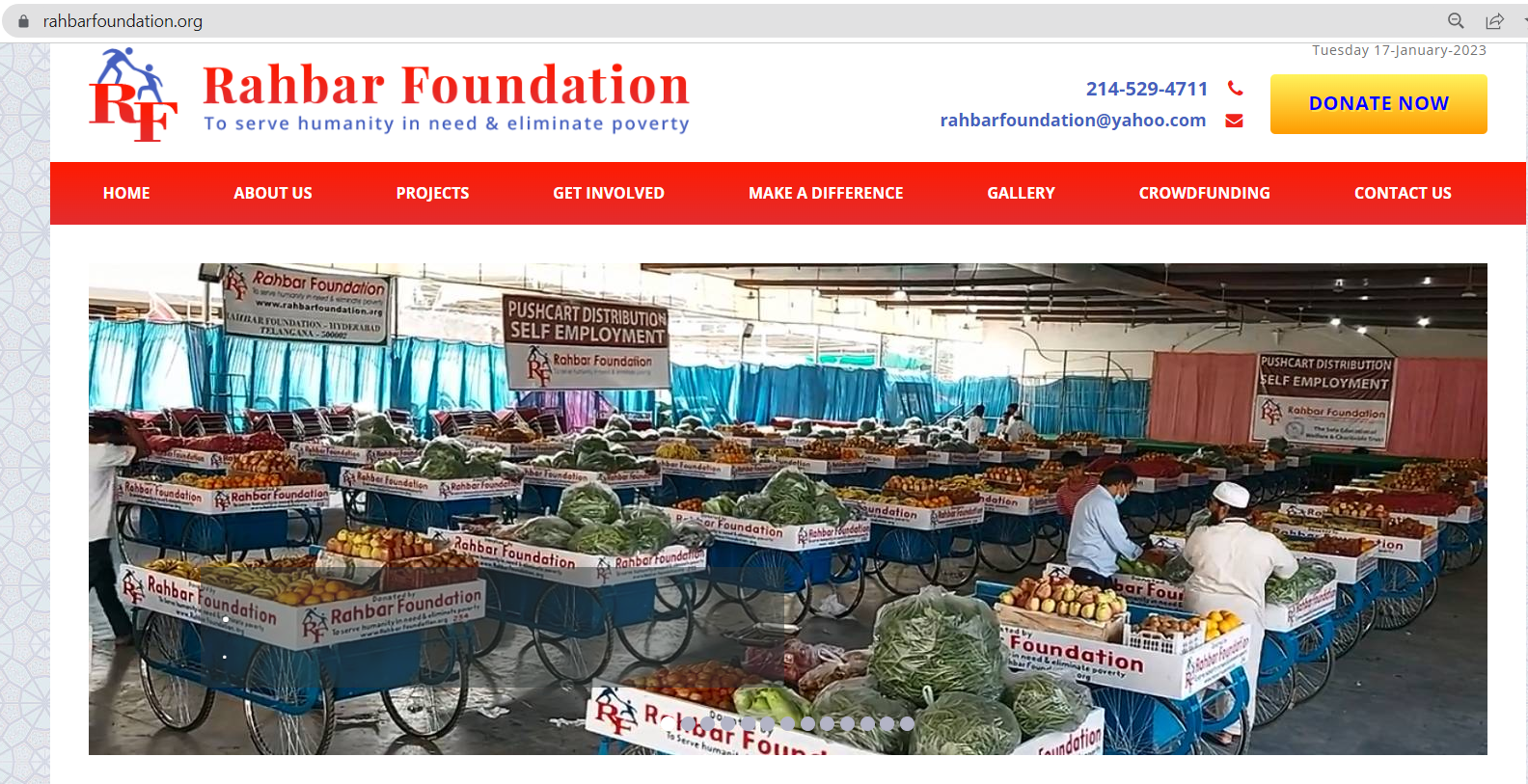 As per the profile of the organisation available in Guidestar USA website (a leading NGO information repository), the objective of Rahbar Foundation reads as follows:

The Rahbar Foundation is USA based 501 (C) (3) approved non-profit charitable organization & established to serve humanity regardless of race, gender, ethnicity, class, location, religion, color, cultural diversity and social background, with a special focus on the majority of the population living below the poverty line. We are dedicated to providing charitable assistance in the field of education, healthcare, hunger, emergency relief and other social welfare services to alleviate the poverty of underprivileged people around the globe with major focus on India. Every dollar contributed by donors is used as efficiently as possible to maximize the impact on the beneficiary.

While the organisation claims to serve humanity irrespective of religion, it is observed that the organisation’s board is made up entirely of Muslims. The chief functionaries of the organization, as mentioned in its Form-990 submitted US Internal Revenue System (IRS), are Azhar Pasha Khaja, Ahmed Siddiqui and Nasim A Sheik. Per the website of the Rahbar Foundation, the charity programmes being implemented are Sharia-compliant programmes, and almost all the beneficiaries are from the Muslim community only. In addition to the following programmes, the foundation, through its partner NGOs in India, also runs ‘Self-Employment’ projects, and training programmes and provides ‘Micro-Finance for Business’.

The annual financial reports also mention that Rahbar Foundation has been donating to individuals in India through a network of local organisations in various parts of India. The following is the list of various programmes being implemented. In particular, Zakat can be collected from Muslims only and utilised for the welfare of Muslims. Thus there is a clear divergence between objectives as recorded with USA tax authorities for claiming charity status and tax exemption and programmes delivered on the ground:

The following is the snapshot of the organisation’s financial data for the year 2019 as per the CauseIQ website:

As per the Rahbar Foundation’s 2017 to 2021 Annual Financial Statements made available on its official website for public view, it has transferred more than US $ 3 Million to India in the name of financial aid.

Funds are transferred by the foundation from the USA to NGOs set up by Muslims in India and functioning for the welfare of Muslims in various parts of India. While the foundation’s website mentions India as its area of operation, the tax returns filed with US tax authorities camouflage the actual name of the country by mentioning ‘SOUTH ASIA’ as the area where funds have been utilised. 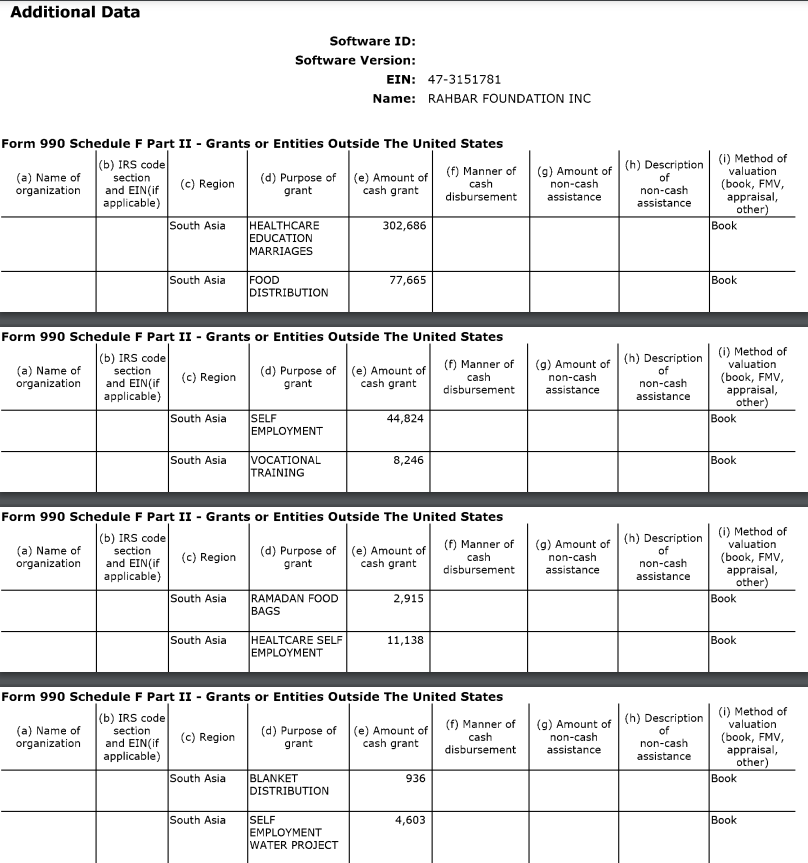 Rahbar Foundation has established its Indian unit in Hyderabad with a vast network spread across the country by partnering with local NGOs. Further study of the Indian entities receiving aid from the Foundation revealed that most of the recipient NGOs in India do not have FCRA permission to receive funds from abroad. This is a severe violation of the Foreign Contribution Regulation Act 2010.

Apart from direct financial contributions to Indian entities and individuals, Rahbar Foundation (US), as per its website, is also partnered with several Global Corporate companies, including Amazon (under the ‘Amazon Smile’ programme), for running a welfare activity under its ‘Corporate Matching Gift & Volunteer Grant Program’. The official website defines corporate matching gift programs as charitable giving programs created by corporations in which the company matches donations made by employees of partnering corporates. It also says that ‘one can double the impact of one’s donation by utilizing the matching gift programs that are in place at thousands of employers.

For the year 2019 and 2020, the Rahbar Foundation received funds from the following foundations and non-profits in the USA.

Annual Financial Statements provided by the Rahbar Foundation (US) on its website for 2017 to 2021, respectively, have listed some Indian entities across several states. Nijam Today’s investigation is based on NGO Darpan’s official website (run by the NITI Ayog), and the FCRA Database maintained by the Ministry of Home Affairs, Government of India.

Note: It is important to note that on 4th October 2017, MHA issued a notice making it mandate for all the FCRA registered associations and those who are seeking registrations under the FCRA Act and prior permissions to accept foreign contributions to register with DARPAN Portal with all details such as names of chief functionaries, addresses etc.

After careful examination by cross-checking the Indian entities listed in the annual reports of the Rahbar Foundation with the information available on Darpan’s website www.ngodarpan.gov.in and FCRA Database open to the general public on https://fcraonline.nic.in/fc8_statewise.aspx, it is found that except a few, none of them is registered with the Ministry of Home Affairs under the provisions of the Foreign Contribution Regulation Act, 2010 which is mandatory for NGOs to receive foreign funds.

Here is the list of Indian entities mentioned in the annual reports of the Rahbar Foundation, which are said to have been funded by the said US-based Islamic charity NGO.

It is found that except for the Musthafa Sabiya Educational Trust, Darul Uloom Qasdus Sabeel Educational & Welfare Trust, and Muslim Educational Social & Cultural Organization (MESCO), none of the above Indian entities mentioned in the annual reports of the Rahabar Foundation has either listed in NGO Darpan’s site or the ‘List of FCRA Registered Associations’ section under www.fcraonline.nic.in. Most entities don’t even have websites, and the addresses of a few NGOs are not traceable through online searches. Details of prior approval under FCRA, if any of Rahabar Foundation registered in Hyderabad, are not found in the FCRA Database of the Ministry of Home Affairs. The bulk of Rahbar Foundation USA’s funds is remitted to its namesake entity in Hyderabad, India.

In India, NGOs such as trusts, societies, non-profit business entities (section 25/8 Companies) or individuals that intend to receive foreign contributions or donations from foreign sources are required to obtain registration under Section 6(1) of the Foreign Contribution Regulation Act, 2010. In its recent judgement, even the Supreme Court of India held that receiving foreign funds is not an absolute or fundamental right of the citizens of the Nation.

One of the objectives of the National Policy on the Voluntary Sector is to ‘encourage NGOs to adopt a transparent and accountable system of governance and management’. While it is not proper to make sweeping generalizations, it is necessary to note that the NGO sector in India is vulnerable to the risks of money laundering and terrorist financing.

Though Rahbar Foundation’s US operations seem noble and laudable on paper, there is a clear violation of the Foreign Contribution Regulation Act by recipients of its aid in India. Contrary to lofty ideals of serving humanity irrespective of race, religion etc., there is a clear-cut intention to serve only the Muslim community, and its aid projects are Sharia-compliant and exclude non-Muslims. Under these circumstances, can Rahbar Foundation claim charity status and tax exemption under US laws?

Can charity, however noble, be allowed in contravention of India’s laws? Helping the needy is a noble act, but if it is done by breaking the law, then something wrong can be suspected. One such case is the operations of Rahbar Foundation, a US-based charity organisation, funding a particular section of the society in India by violating FCRA and Money Laundering Acts invites suspicion and needs further investigation by the Government of India.