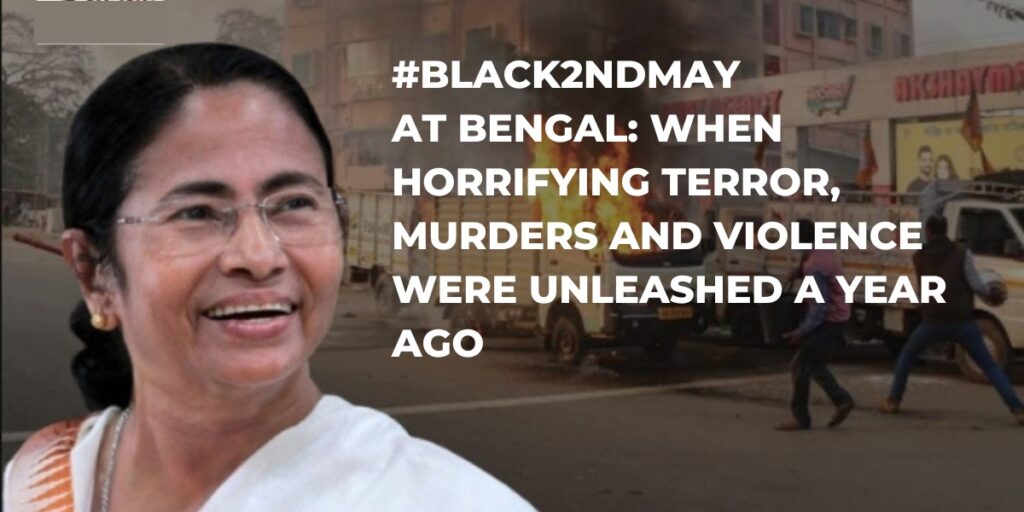 A dark day was witnessed a year ago when Bengal started burning after the assembly elections results were announced and Mamata Banerjee was elected as Chief Minister of the state. Ever since the Mamata Banerjee-led retained power in the state, the persecution of dissenters and opposition workers had intensified.

The TMC goons have wreaked havoc, attacking and plundering the houses of their opponents. Since she retained power in Bengal, several BJP activists were attacked, intimidated, and killed and women were gang-raped. For this bloodbath, the fingers were pointed at Trinamool Congress goons for unleashing violence in the state.

Under TMC’s leadership, assaulting people specifically Hindus, and even killings were the norm in West Bengal. However, all hell broke loose when the announcement of the state Assembly poll results was made on May 2 last year. It should be noted that no such incidents were reported when UP elections results were out this year!

Why a Kashmir-like situation that was 30 years ago is being “created” by Mamata Banerjee now? And why nobody is talking about it? Why the Bengal govt is dividing the state? Are we going to allow Indians to become refugees in their own land again? Why liberals, who call Modi a fascist, are silent when Bengal burns under Mamata Banerjee’s administration!

Twitteratis has recalled the horrifying terror that happened a year ago.

One user claims that the current scenario is same as the days of #Postpollviolence.

Remembering all the martyrs of @BJP4Bengal.The frightening environment of #WestBengal is not over.Current scenario is as same as the days of #Postpollviolenece.
Let’s fight together to establish peace & rule of law in #Bengal.#Black2ndMayAtBengal #Black2ndMay @AmitShahOffice pic.twitter.com/FKG2wuBowb

We stand in solidarity with People of Bengal who faced state unleashed Terror in form of Gang Rape, Murder and Burn…#Black2ndMayAtBengal pic.twitter.com/1BxLcpySmA

A year has passed since the post poll violence was unleashed on BJP workers and their families.

Dozens of Hindus were murdered.

Hundreds of Hindus fled their homes.

But, justice was denied.

The families of the victims marched in Delhi, demanding justice.#Black2ndMayAtBengal pic.twitter.com/O6tBYpccaZ

“I pleaded with him, saying I’m like ur mother, but he did not stop. I, a #Hindu woman, lost my honor to a #Muslim TMC goon”, said a rape survivor. Usman raped her and her fault was that she voted for BJP.

“I pleaded with him, saying I’m like ur mother, but he did not stop. I, a #Hindu woman, lost my honour to a #Muslim TMC goon”, said a rape survivor to me. Usman raped her as her fault was that c voted 4 @BJP4Bengal.#Black2ndMayAtBengal

It marks one full year for the 3rd term of the hyped TMC government.

Let me point out a few that I can remember, and I will try to be as objective as possible. Included a few of their much advertised strong points also. Please read the long thread (1/n)

Kolkata police has denied BJP permission to hold an exhibition on the horrific post poll violence under Mamata Banerjee’s watch. What does she fear? Is she scared of standing on a ground that is oozing blood or finds cries of hapless women being raped by TMC workers deafening? pic.twitter.com/J3XfyrT2ei

Taking to his official Twitter handle, he claimed, “Kolkata police has denied BJP permission to hold an exhibition on the horrific post-poll violence under Mamata Banerjee’s watch. He went on to ask, “What does she fear? Is she scared of standing on a ground that is oozing blood or finds cries of hapless women being raped by TMC workers deafening?”

Earlier on Friday, a delegation of 10 advocates from “Lawyers for Justice” along with the victims of the West Bengal post-poll violence met Union Home Minister Amit Shah to press for their demand for President’s Rule in the state. “We had a detailed discussion with the Home Minister that lasted for about 45 minutes. He listened to the victims’ problems and assured to look into the issue. We have been continuously demanding President’s Rule,” Kabir Bose of the ‘Lawyer for Justice’ told the media.

Prior to the meeting with Shah, the group of advocates also met President Ram Nath Kovind on Friday and urged for the imposition of President’s Rule, claiming a “complete breakdown of law and order in the state”.