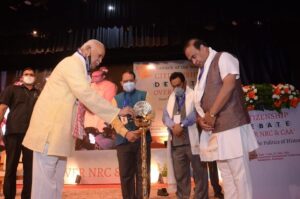 Guwahati. Secularism, democracy, and pluralism are inherent in our culture and the people of Bharat (India) do not need to understand the concept of inclusiveness from other nations, said Sarsanghchalak of Rashtriya Swayamsevak Sangh Dr. Mohan Bhagwat on Wednesday while addressing a dignified gathering in the city.

Sarsanghchalak Dr. Bhagwat, while inaugurating a book tiled titled ‘Citizenship Debate over NRC & CAA: Assam and the Politics of History’ at Shrimanta Shankardev Kalakshetra, also added that citizens of the great nation have been practicing the concept of vasudhaiva kutumbakam (the world is one, we are one) since thousands of years back. “We have neither adhered to democratic norms in the recent past nor adopted the secularism later. Our great leaders who drafted the Constitution were liberal and secular in character and practices,” stated Dr. Bhagwat adding that the patriotic nationals always regard India as their Karmabhumi, not as Bhogyabhumi.

However lately, the country has witnessed the emergence of a large volume of people who demand all constitutional rights but do not like to perform duties defined by the same constitution, he opined adding that Indians are relative even though they are pursuing different languages, cultural activities, rituals, and food habits.

“The problem starts when a particular group of people wants a single-track religious, linguistic and social practice,” asserted the RSS chief adding that those people do not hesitate to use their democratic power with the help of increasing population defying the five thousand years old civilization of the land. Then the original habitants get threatened to maintain their language, culture, and other social values, pointed out Dr. Bhagwat adding that the systemic migration of Muslim families to India and then the increase of population under a design is a matter of concern for different communities including the Assamese.

“We should pursue assimilation, but that should be without any future threats to our own people. If the settlers increase their population to dominate in all aspects including the electoral politics, the communities among the original inhabitants will definitely get scared,” observed the octogenarian socio-cultural thinker.

Speaking about the controversies related to the citizenship amendment act (CAA), he asserted India was divided by a group of leaders without the endorsement of millions of freedom fighters and common Indians. They wanted a unified Bharat, but their dreams shattered when many of them found themselves as Pakistani nationals.

After the partition, the Indian government successfully addressed the concerns of minorities, but Pakistan did not and it compelled hundred-thousands of persecuted Hindu, Sikh, Jain, etc families to leave their ancestor localities and enter India. The CAA rules support those refugees and it has nothing to do with Indian Muslims, asserted Dr. Bhagwat.

On the national register of citizens (NRC), he opined that every nation has the policy to identify their genuine nationals along with legal and illegal migrants taking shelter in their countries. The government has the duty to detect unauthorized settlers so that it can formulate welfare policies effectively for the benefit of their own people. Dr. Bhagwat strongly denied that NRC has any ill-intention towards the Muslim citizens.

We are different in language, caste, etc but to run the country we are the same or we became one. This is our birthplace and workplace and we cannot leave our ideology, as it has become a part of our life and identity. We get solutions to all problems when we stand together and united.

The function was also addressed by Assam chief minister Dr. Himanta Biswa Sarma, Guwahati University vice-chancellor Professor PJ Handique and author of the book Prof Nani Gopal Mahanta. In his speech, Prof Mahanta, who teaches at Guwahati University, expects an informed debate on the issues raised in the book, published by Sage International in the international category.