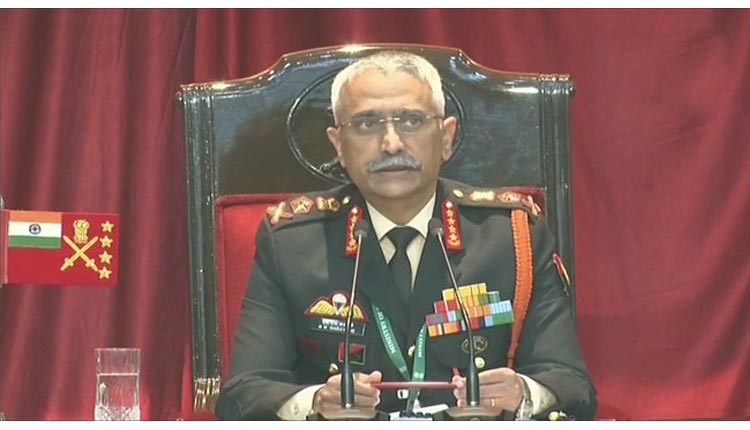 Indian Army Chief General Manoj Mukund Narwane has revealed that a new plan was developed for a technology-augmented army in order to overcome the challenges in future.

He said Pakistan is still dependent on terrorism and made it clear that it would not be tolerated. He warned that we would retaliate in the right way at the right time. He clarified that China and Pakistan have become a problem and that fact cannot be denied.

Noting that we faced many challenges last year, he said the situation along the border as well as issues like Covid19 had become crucial. He said that they were always on the alert along the northern borders. Saying that they are waiting for a peaceful solution, he assured that they are ready to face any problem. The Army Chief said that all aspects have been taken into consideration.

He said that PLA troops arrive at the traditional training areas every year and would be evacuated in the winter after the end of the training period, adding that the withdrawal of PLA troops from the Tibetan plateau was a good outcome.

But in the conflict zone, the number of troops on either side has not decreased, he said. He expressed the view that the talks between India and China should continue with mutual respect. He expressed confidence that a solution would be found to the border issue.

He regretted that the number of accidents hasn’t gone down in the high altitude areas in spite of a large number of troops. Cold injuries were 0.13 per cent last year and 0.15 per cent this year.

He explained that the border was on high alert and that there were conflict zones in the central and eastern sectors of the LAC. He said that China had set up its own infrastructure there. “We are constantly monitoring their movements and changing our tactics based on that,” Narwane said.