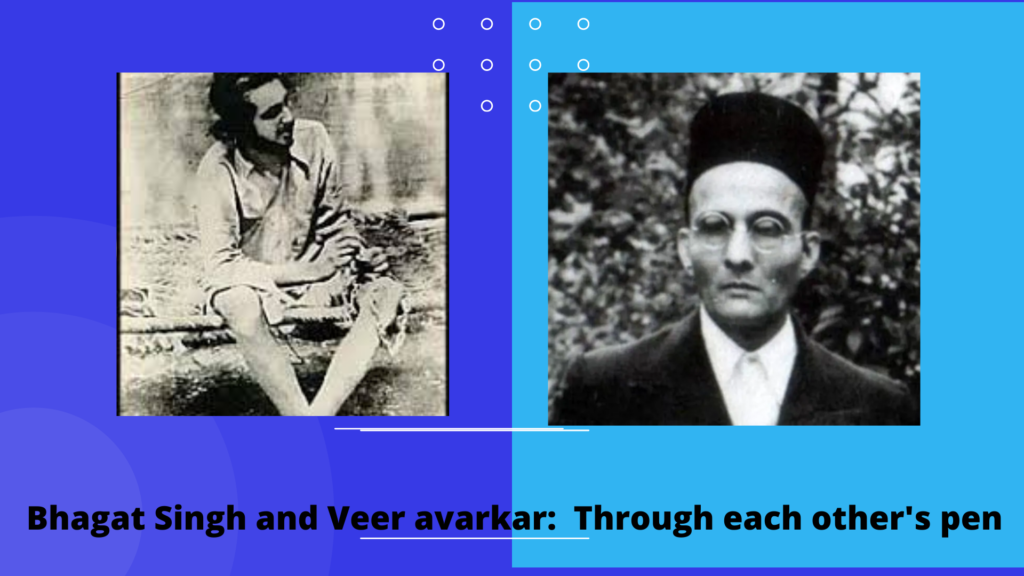 Freedom fighters Bhagat Singh and Veer Savarkar have on many occasions referred to each others works and have even written about each other extolling and supporting each others fight against tyranny of the colonial forces. Their own works are a testimony to this.

“World-lover is the hero whom we do not hesitate a little to call a fierce insurgent, staunch anarchist – the same heroic Savarkar. Coming in the wave of world-love, he used to stop walking on the grass thinking that the soft grass would be mowed under the feet.”

The above quote about Savarkar is from the martyr Sardar Bhagat Singh! Bhagat Singh Ji’s article titled “Vishwa Prem” has been published twice in the issue of “Matwala” on 15th and 22nd November, 1926. This quote is an excerpt of the same article. “Our ultimate goal is universal brotherhood. Nationalism is only a step to get there,” Savarkar has said many times. This article states that this was not only known to Bhagat, but was also acceptable. Such a description of an externally hard but extremely tender inner heart of Savarkar has hardly been seen elsewhere.

The special thing is that Savarkar was under house arrest in Ratnagiri on the condition of not participating in politics in those days. Bhagat has not written a word of criticism over Savarkar’s decision to accept this condition. We can say that these two revolutionaries understood each other’s hearts and minds very well. Then in March 1926, while writing about Madanlal Dhingra and Savarkar in Kirti, Bhagat Singh says

“The impact of the Swadeshi movement reached England as well and Mr. Savarkar opened a house called ‘Indian House’. Madanlal also became its member. …. One day, Mr. Savarkar and Madanlal Dhingra were talking for a long time. In a test of daring to give up his life, Savarkar pierced a big needle inn his hand by asking Madanlal to lay his hands on the ground, but Punjabi Veer did not even say ah. Tears filled the eyes of both. The two hugged each other. Ouch, how beautiful that time was. How invaluable and indelible that teardrop was! How beautiful that match was ! so glorious! What should we know about that emotion, what cowardly people who are afraid of even the thought of death, know how high, how holy and how revered are those who die for the sake of the nation!

From the next day, Dhingra did not go to the Indian House of Savarkar and attended the Indian students’ meeting organized by Sir Col. Wylie. Seeing this, the boys of the Indian house got very agitated and started calling him traitors, even traitor, but their anger was reduced by Savarkar saying that after all he had tried to even break his head to run our house. And due to his hard work, our movemet is going on, so we should thank him! Well, some days passed quietly.

On July 1, 1909, there was a meeting at the Jahangir Hall of the Imperial Institute. Sir Curzon Wylie also went there. He was talking to two other people that Dhingra suddenly pulled out a pistol. He was put to sleep forever. Then after some struggle Dhingra was caught. What to say after that, there was a worldwide cry!. Everyone started abusing Dhingra wholeheartedly. His father sent a telegram from Punjab and said that I refuse to accept such rebel, rebellious and murderous man as my son. The Indians held large meetings. There were big speeches, big proposals moved. All in blasphemy. But even at that time Savarkar was the hero who favored him openly. At first, he offered an excuse for not letting the motion pass against him that he is still on trial and we cannot call him guilty. Finally, when the vote was taken on this proposal, the Speaker of the House, Mr. Bipinchandra Pal, was saying that if it is deemed to be unanimously passed by everyone, then Savarkar Sahib stood up and started the lecture. Just then, an Englishman punched him in the mouth and said, “Look, how straight the English fist goes!” A Hindustani young man put a stick on the head of the Englishman, and said, “See, how straight the Indian club goes!” There was a noise. The meeting was left in between. The proposal remained unpassed. Well! “

In 1926, Bhagat Singh wrote an article for the Punjabi Hindi Sahitya Sammelan. He says, “… Muslims lack a great deal of Indianness, so they do not understand the importance of Indianness in all India, and prefer the Arabic script and the Persian language. The importance of being one language of all India and that too Hindi, they never understand, so they keep on praising their Urdu and sit on one side.” Later in the same article, Bhagat Singh says,” We want the Muslim brothers too to observe their faith but become Indian in the same way as Kamaal Turks are. This only will save India. We should look at the questions of language etc. from a very large point of view, not by making it poignant (religious) problems. “These ideas presented by Bhagat Singh are not only in line with Savarkar’s views, but also according to the” Bunch of thoughts”of Shri Guruji. It has been proved that Bhagat Singh published an English translation of Savarkar’s book “1857- War of Independence” and propagated it among the revolutionaries. Some authors have claimed that Savarkar and Bhagat Singh met in Ratnagiri, but there was no unquestioned confirmation.

1) Sacrifice was adorable only when it was directly or remotely but reasonably felt to be indispensable for success. But the sacrifice that does not ultimately lead to success is suicidal and therefore had no place in the tactics of Maratha warfare (Hindupadapada Shahi, Page 256).

2) Fighting the Marathas is like fighting with the wind, is to strike on the water. [Hindupadapadshahi, 254]

3) that remains the despair of our age which has to write history without making it, to sing of valorous deeds without the daring abilities and opportunities without actualising them in life [Hindupadapada Shahi, 245–4]

4) Political slavery can be easily overthrown at any time. But it is difficult to break the shackles of cultural domination. [Hindupadpadshahi, 242-43]

5) No freedom!, whose smile we shall never resign. Go tell our invaders, the Danes, “That’t sweeter to blood for an age at thy shrine. Than to sleep but a minute in chains!”, Quoted by Savarkar, the lines of Thomas Moore (Hindupadapada Shahi, 219)

6) “Rather get killed than converted”, This was the prevalent call among Hindus at that time. But Ramdas stood up and exclaimed!, “No, not thus. Get killed rather than converted is good enough but better than that. Do not get either killed nor get violently converted. Rather, Kill the violent forces themselves and get killed while killing to conquer in the cause of righteousness.” (Hindupadapada Shahi p.141-62) [8]

The depiction of the science-based nation of socialist Hindustan presented by Bhagat Singh is very close to Savarkar’s science-based Hindustan. His support of Nehru’s rendering that he accepts science by keeping both the Quran and Veda apart reminds us of a similar rendering by Savarkar.  In the entire 750-pages of his writings, Bhagat Singh has not criticized Savarkar, his Hindutva, or his acceptance of British conditions. Nonetheless, he has criticized the rioters who support the killing of Muslims in favor of Hindus. (Kirti, June 1928), but they are not intended for Savarkar and do not apply to Savarkar either.  Bhagat Singh’s aide Yashpal has said that Savarakar brothers were our leaders in the revolutionary movement.

Both Savarkar and Bhagat Singh have written articles on the Kakori scandal, Ashfaq is not mentioned in the first articles of both. Savarkar has written another article on Ashfaq later. Bhagat Singh has mentioned Ashfaq in his second article. Revolutionaries like Madanlal, Ambaprasad, Balamukund, Sachindranath, Kuka are the subjects of the writings of both Savarkar and Bhagat Singh. Savarkar had written an article condemning the attack on Lala Lajpat Rai on 20 December 1928. Lalaji died of injuries sustained in the attack. Saunders was killed by Bhagat Singh and his companions to avenge this. Mahatma Gandhi described it as a cowardly act. Savarkar wrote an article on 19 January 1929, critisizing Gandhi ji’s statement. At the same time, he also wrote a famous article on the literature of Lalaji.

At that time Savarkar composed the following poem:

Ha, Bhagat Singh, hi ha!
You galloped on the gallows, oh hai for us!
Rajguru, you ha!
Veer Kumar, martyr in National warfare
Hi ha! Jai Jai Ha!
This ah of today will win tomorrow
Royal crown will come home
Wore you crown of death before that.
We will take arms in our hands
The ones with you were killing the enemy!
Who is a sinner?
Who does not worship the unmatched sanctity of your intentions
Go, martyr!
We take oath with testimony.
the fight with arms is explosive,
We are remaining behind you
Will fight and win freedom!!
Hi Bhagat Singh, Hi Ha!

The saffron flag was always hoisted at Savarkar’s house in Ratnagiri. His home address could be identified by this only. However, on 24 March, a black flag was displayed at Savarkar’s house. It was not difficult for the government to understand it. Singing this poem, the children of Ratnagiri took out a procession on March 24, when Savarkar went to a village called Varvade. He returned on March 25 and hoisted the black flag. Savarkar published an article reminding Bhagat Singh within four months. The occasion was that of Nepali movement.  Other companions of Bhagat Singh, Shiva Varma, Vora etc. have also written about the influence of Savarkar on the revolutionaries.