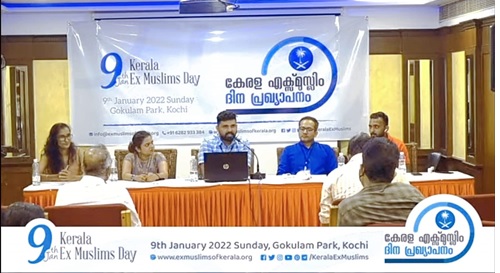 In a significant development an organisation named Ex-Muslims of Kerala has decided to observe January 9 as Kerala ex-Muslims day. This decision was announced in meeting held at Kochi on 9 January 2022. The ex-Muslims of Kerala is the first formal organisation in India to be established for Muslims who are renouncing Islam. The organisation was founded recently to provide emotional, social, financial and legal support for the Muslims those who are leaving Islam. According to its leaders many ex-Muslims are facing various kinds of discrimination in the Islamic society. Ostracism, financial boycott, threat to life etc. are common feature in the name of apostasy.  The established aim of the organisation is to collectively fight such discriminations and attacks against ex-Muslims.

On January 9th 2021 there was a debate between Salafi preacher named M M Akbar and Islamic critic named E A Jabbar master. This programme encouraged many Muslims to question the dark side of Islam. As a result, many Muslims in Kerala left Islam. Further, the programme also exposed false narratives of radical Islamic preachers. Therefore, the leaders of ex-Muslims of Kerala has decided to choose the date as a milestone to observe as Kerala ex-Muslims day hereafter. Social activist Jasla Madassery, Arif Hussain Theruvath, Liyakhat Ali etc. are the prominent faces of ex-Muslims of Kerala movement. All the three are subjected to many kinds of intimidations and threat for publicly denouncing Islam.

According to some reports the trend of people renouncing Islam started in Kerala around 1985 and during the past three decades many people left Islam. Further, there were secret association of such ex-Muslims in Malabar region. But the new development is regarded as a reaction against the growing radicalisations and superstitions in the Islamic society Kerala. The works of atheist like E A Jabbar and C Ravichandran also influenced the movement in the recent times. This movement has great significance in the background of changing demography and growing clout of radical outfits like PFI in Kerala.