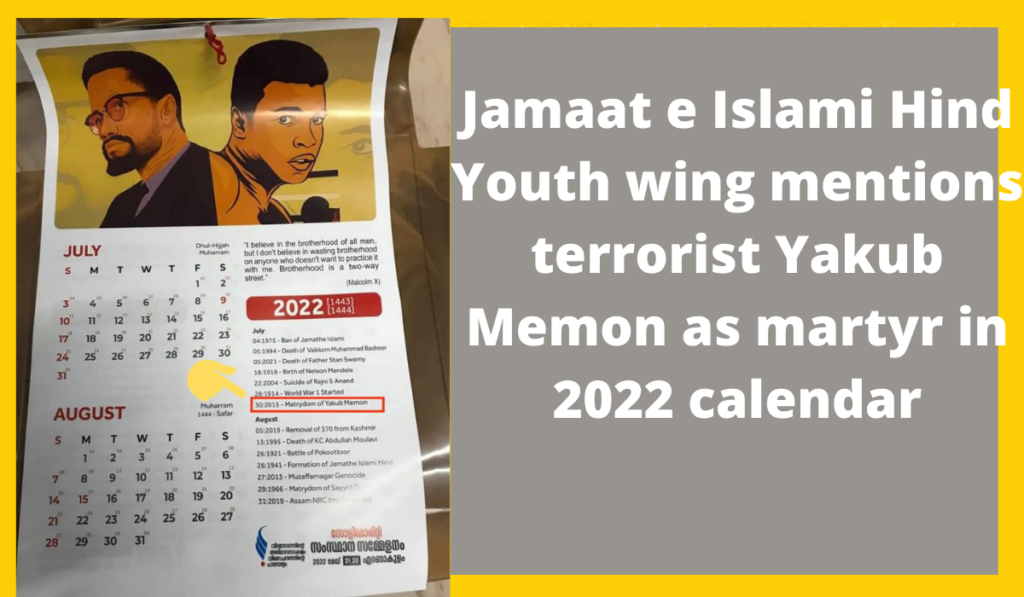 Solidarity Youth Movement, Kerala, the Youth wing of organization Jamaat e Islami Hind has published a calendar for 2022, whereby they’ve mentioned terrorist Yakub Memon as a ‘martyr’. Yakub Memon has been proved guilty of his involvement in the 1993 terrorist attacks in Mumbai.

The movement’s so called stated objective is to “liberate the generation of youths from moral bankruptcy and debauchery and to transform them into a radical vanguard fighting for the betterment of society”. It, along with its parent organization Jamaat-e-Islami Hind, has shared common ground with India’s left-wing parties on several international issues.

Jamaat-e-Islami Hind is an Islamic organization in India founded as an offshoot of the ‘Jamaat-e-Islami’, which split into separate independent organizations in India, Pakistan, Bangladesh following the Partition of India in 1947. The Indian govt has banned the organization twice. Politically, by 2002 it was described to be campaigning against advances by Hindu nationalists. In 2011, it facilitated the launch of a national political party; Welfare Party of India, under a leadership that included top functionaries of the organization and members from the wider Muslim community and outside, including a Christian priest.

Youth Wing of Jamaat e Islami Hind has released 2022 calendar in which terrorist Yakub Menon is shown as Martyr. There is no mention of Independence Day in their calendar. pic.twitter.com/pIGInfTX2I

Regarding the 1993 series of bomb blasts in Mumbai, Yakub Memon was charged with criminal conspiracy, aiding and abetting and felicitating a terrorist act, illegal possession and transportation of arms and ammunition and possessing explosives with intent to endanger lives. Memon was sentenced to death on July 27, 2007.