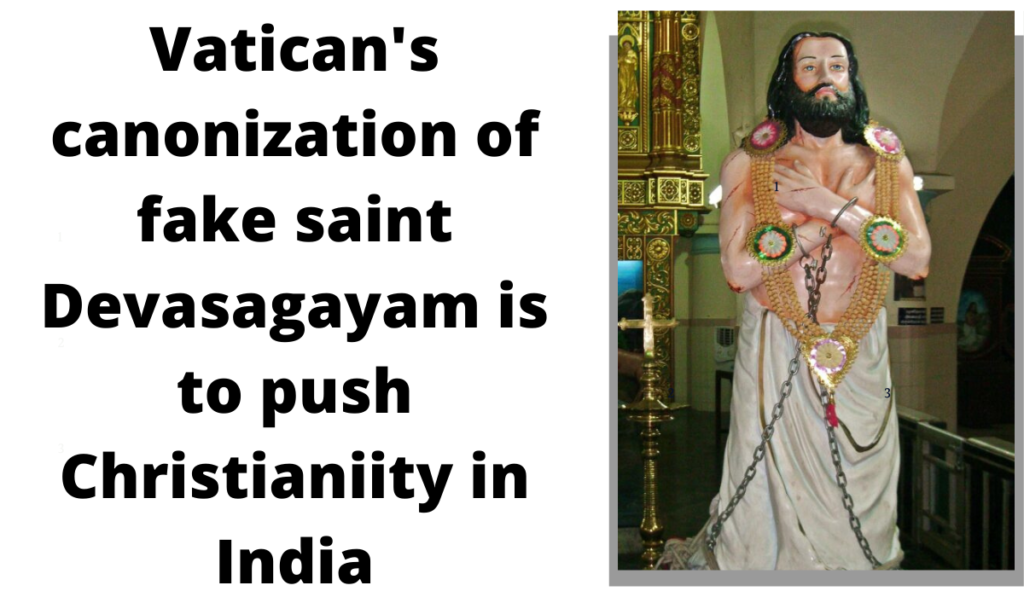 ‘Devasagayam’ – The truth about the newest saint out of India

On November 10, the Vatican announced that ‘Devasagayam’, who is said to have lived in the 18th century principality of Travancore, would be canonized. The Indian media immediately went onto celebration mode. They praised the Vatican’s decision and proudly announced that Devasagayam is the first Indian to be canonized in history. Look at the respect Christianity has given to an Indian – was the central theme in almost all major stories. They also didn’t forget to mention that Vatican’s announcement is an award of recognition given for the sacrifice made by Devasagayam.

Not just that! They crossed decency limits by saying, ‘Devasagayam Pillai belongs to the Nair community. Vatican’s announcement has sanctified entire Nair community. Who is Devasagayam Pillai? What was the motive behind his sudden canonization? What is the reason for the lifting of the Nair identity of the Devasagayam when it is said that there is no caste in Christianity? We met Bala Gautaman, a historian and director of the Center for Vedic Scientific Research, with many such questions. He says there are some things we need to know before analyzing the matter of Devasagayam in detail. An award is a recognition given to a person who has done a particular deed well. For example, for our country, soldiers who exhibit great valour on the battlefield are given awards like Veer Chakra and Bharat Ratna for being the best citizen. Similarly, there are reasons behind the titles given by the Vatican.

The Vatican is not a holy place like Kasi or Rameswaram as most people think. It is a political capital. Its head-of-state is the pope. Their political ideology is ‘Christianity’. The Vatican is trying to bring its other countries under its control by spreading this ideology. Christian missionaries are their soldiers who are currently working to spread Christianity. But a few centuries ago, the Vatican used military force to bring many European nations under the control of Christendom. Many countries today remain Christian as a result of the war waged by the Vatican’s sectarian army. The Vatican still controls those countries. But when it comes to war, casualties happen on both sides right? Thus, in honor of veterans who have served in the Vatican’s Army, the title given by the Vatican Government is ‘Venerable’!

That is, the Vatican is a government. Venerable is the title that honors those who fought and sacrificed in support of the Vatican government without loyalty to their own government! War here does not simply mean fighting with the sword. Refers to all the tricks done to destroy other religions and cultures. Its not my interpolation. But famous second century pastor Tertullian, said this. As Tertullian’s view is accepted by “Pope John Paul II” and he too recogonizes “martyr of the Vatican’s. The Vatican conferred the title of “Venerable” in 2012 in anticipation of the canonization of the character “Devasagayam”. What does this mean? Devasagayam is not loyal to India. Is the survivor of the Loyalty to the Vatican. Islamic movements celebrate the traitors responsible for the Coimbatore bombings as martyrs and honor them with the title of ‘Ghazi’. Vatican’s announced title is no way different to it.

Next we will look at how Devasagayam has been given the title of Saint.

Pope John Paul II said ‘In the first millennium BCE, we converted Europe as a whole. In the second millennium we conquered America and converted the people. Vatican’s future military plan to “convert Asia in the next millennium. India is the most important country in Asia! India has been a Hindu country for about 500 years of Islamic rule and the next 200 years of British rule. Most Southeast Asian countries follow Indian culture. So, if you want to catch Asia, you have to catch India.

How to capture India? That is why the Vatican has taken up the weapon of the title of ‘Saint’.

The Vatican’s plan is to find someone in any of the countries they think should be converted and give them the title of ‘saint’.

During the colonial period, Christian missionaries wrote and spread false adventure stories to spread Christianity among the local people. This has been done in many countries since India. There is even a template for these adventure stories! The villains are the native people! They will be portrayed as savages, worshipers of Satan, and oppressors of the poor. Later it was written that the hero of the story spread Christianity and upheld social justice and that some local miscreants who did not like it killed the Christian hero. When the locals hear this story, they feel a hatred for themselves. There will be hatred over their culture. It also gives the impression that Christianity has elevated their status. Utilizing this, Christian missionaries will create a cult similar to Sai Baba around the hero of the adventure story.

If the cult has become very popular among the locals, they will declare the title of sainthood. By the time the cult would have become popular among Hindus too. Even if the canonization is announced, the title will be given only after a year of dragging. Do you know why? Until then, they will keep on talking about that person. The plan is to spread the story of anti-indigenous people across the country and to make the respective people hate their culture and support Christianity.

That is what they are currently doing in the matter of ‘Devasagayam’.Christian adventure stories in general can be divided into two types. One is a false story written with a real character. Second is fake story written with a second fake character! The story of Devasagayam is an example of the second type.! Let us first find out what is mentioned on the website owned by the Christian Churches about Devasagayam.

Devasagayam Pillai was born in 1712 in an upper caste Nair society. His real name is Neelakanda Pillai. He was in government service in the princely state of the Maharaja of Travancore. In 1741, the Dutch lost the war between the Dutch and the princely state of Travancore and surrendered to King Marthanda Varma. Eustachius De Lannoy’, commander of the Dutch forces, joined Marthanda Varma as commander-in-chief. Neelakandapillai got the friendship of Dutch commander Eustachius De Lannoy’ .Through him Neelakandapillai was inspired by Christianity. Later, in 1745, he converted to Christianity and changed his name to Devasagayam Pillai through a pastor named ‘Pellatari’ from Vadakkankulam.

Devasagayam Pillai, who converted to Christianity, was accustomed to all sections of the society irrespective of caste. He converted the people by understanding the superiority of Christianity.This is not to the liking of the dominant caste Nair, Namboodiri. Thus the Devasagaya was reported to the king of Travancore. He was subsequently arrested in 1749. He continued to suffer many tortures by the king of Travancore while in prison. During that time many miracles were performed by the grace of Jesus. He was eventually shot by the king’s soldiers on Kattthadi Hill near Aralvaymozhi.

Renowned Kerala historian Mr. A. Sridhara Menon 20.1. 2004 in an interview with Pioneer magazine that day, he wrote: â€œThe death penalty Leave it, one in the name of conversion in the history of Travancore, not even a minor sentence was recorded to have been handed down. This is a completely fabricated fantasy.

President of the Indian Institute of Historical Studies (ICHR) Mr. MGS Narayanan, named Neelakanda Pillai argues that there was never an army commander under Marthandavarma by name or Devasagayam.

Mr. Nagam Aiya, who wrote the history of Travancore said It is unbelievable that converts in the country have a habit of portraying their ancestors as priests custom; It is on that basis that this story was conceived. This was mentioned in Travancore Manual Vol II page 129-130, M.Nagam Aiya. 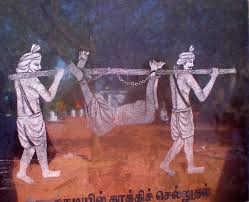 Not only that. Christian missionaries say that Devasagayam had a wife named Bhargavi who had a child and that she too had converted to Christianity. If you visit the tomb of that Bhargavi today, not all the Tamil characters written on it are ancient characters. That means everything is freshly made half-set!Whichever Marthanda Varma king is blamed for killing Devasakaya’s child for converting to another religion, that king is the one who allotted the land tax free to Varapuzha Church (Travancore Manual, Vol-I page 16, T.K.Veluppillai). So, there is no evidence that Devasagayam Pillai lived in Travancore. There is also no evidence that the king of Travancore was a Hindu fanatic. Christians claim that Devasagayam Pillai converted to Islam by Dilana, a Dutchman. King Marthanda Verma built a church in Udayagiri fort for the same Dilanoi and paid 100 rupees a month to the priest who worked in that church! (Travancore Manual, Vol-I page 16, T.K.Veluppillai).

In that case, it would be ridiculous for a child to be canonized.

But the Vatican does not care about that. The Vatican will convert 100 percent of the natives to the saints of their choice, imaginary or real. When the thing is done, we will withdraw the title saying that there is not enough evidence that the person who gave the canonization lived. But the people changed their religion!The Vatican has so far canonized tens of thousands. Two thousand of them have been canonized. But the people changed their religion!

Today Devasagayam will be canonized and Hindus will be converted to provoke caste conflict. But after tomorrow’s conversion, it should come as no surprise that the Vatican will later say that there is no evidence that Devasagayam lived. What a total loss to us!