Lavanya hails from Vadugapalayam village in Ariyalur district. She was studying class 12 at the Sacred Heart Higher Secondary School, a government aided Christian school located in Thirukattupalli, Thanjavur district. Her mother had died eight years ago and has been living at the St. Michael’s Girls Hostel near her school for the past five years.

The school had allegedly forced Lavanya to convert to Christianity saying that she has to change her religion if she wanted to study further. But the girl refused.

While other children of the school went home for Pongal holidays, the school staff had forced Lavanya to do chores like cleaning the toilet, washing dishes, etc. Unable to bear the humiliation, a disheartened Lavanya attempted suicide by consuming pesticides used in gardens.

Lavanya started continuosly vomitting from the night of January 9. As her health started deteriorating, the hostel warden took her to a nearby clinic for treatment. As the vomiting continued, the warden of the hostel called her parents and asked them to take her home. When she went back home, Lavanya had not disclosed that she had drunk pesticides.

She was admitted to the Tanjore Government Medical college hospital on January 15. It was found that almost 85% of her lungs were affected. Her kidney too had failed. She was being treated in the Intensive Care Unit.

She had disclosed that she consumed poison to the doctor only on January 18. However, the girl died shortly later.

A tweet shows the child’s last few words, where she describes the tortures she was put through in the school.

“My names is Lavanya. They (school) had asked my parents in my presence if they can convert me to Christianity and help her for further studies. Since I didn’t accept, they kept scolding me.”, she says in the video. She also names one Rachael Mary who had allegedly tortured her.

On January 17, Lavanya’s relatives gathered in front of the Thirukattupalli police station and protested saying that Lavanya had consumed pesticides as the hostel warden Sagayamary had forced her to convert.

However, the Times of India in its coverage of the incident had completely ignored the religious conversion angle. It has not even mentioned the name of the school calling it as a ‘government aided higher secondary school in Michaelpatti villlage near Thirukattupalli in Thanjavur district’. 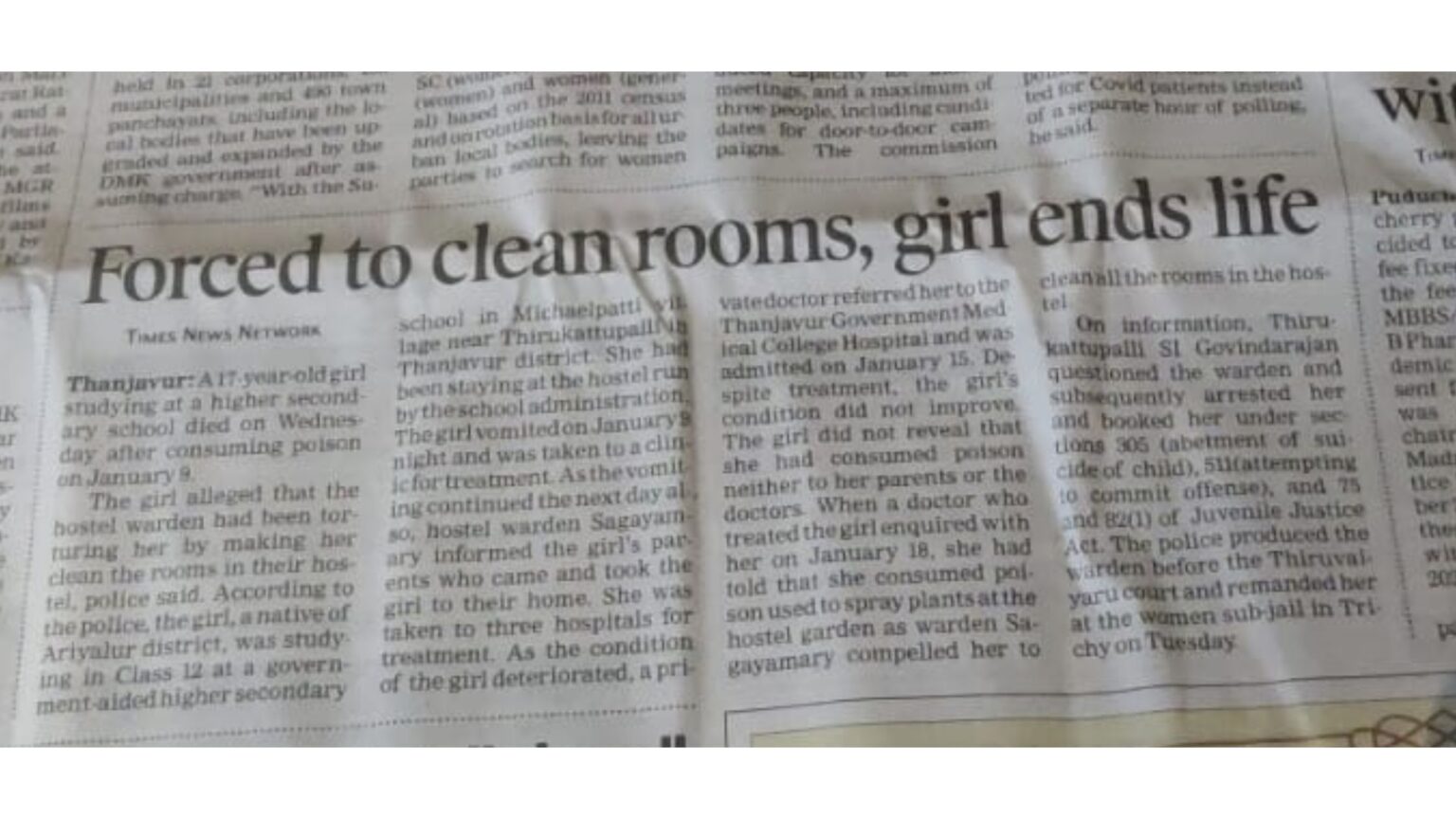 Despite the girl mentioning that she was forced to convert to Christianity in her dying declaration video, the Times of India has completely brushed off matter under the carpet.

Last confession of a Hindu girl in Tamilnadu.

She says how the christian school institution directly forced her to convert to Christianity!

The girl refused to convert, and obviously was tortured by school for that.

She finally attempted sucide and died in hospital today. pic.twitter.com/tcVRyFFV03

The Vishwa Hindu Parishad, Hindu Munnani and other Hindu organizations had come in support of the child. On speaking to VHP State Spokesperson Arumuga Kani, he said, “The Vishwa Hindu Parishad will not rest until justice given to the student Lavanya. As a first step, VHP is to hold a hunger strike today (19th January) under the leadership of Thanjvur district secretary Muthuvel. We need to ensure that such incidents don’t happen again. Until then, we will protest.”

It is to be noted that a section of the media which had gone bonkers when a sexual harassment incident came to light in Padma Seshadri Bala Bhavan (PSBB) school, has bothered to give attention to the incident. Leaders of the DMK and its allies who had given elaborate statements during the PSBB incident are also on mute.

This is not the first incident of a crime that has happened in a Christian school. In the last week of December, a case was registered against the headmaster of a school run by Church of South India (CSI) – Tirunelveli for sexually harassing girl students.