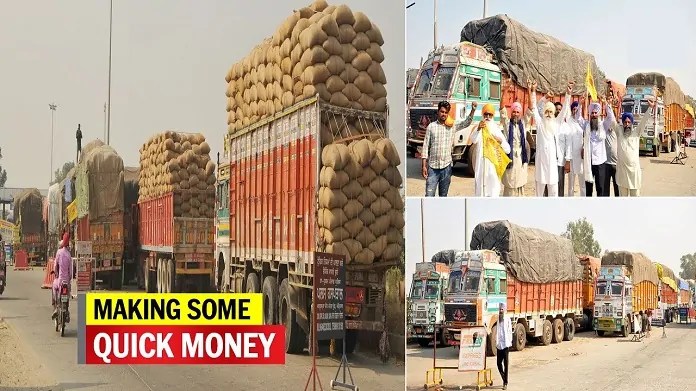 A section of the government-dole seeking, rich farmers of Punjab is once again finding itself in a spot of trouble after being seen taking the help of Khalistani extremists, getting themselves massaged while protesting, rioting at the Red Fort of Delhi during the Republic Day, lynching people in retaliation in Lakhimpur Kheri, etc as 21 of them have been arrested for illegally buying crops and foodgrains from other states to sell at a higher price in the state. Profiteering under the guise of the Minimum Support Price (MSP), some rice mill owners and arhatiyas (brokers) are making a lot of ill-gotten money.

Rampant cases of illegal procurement of paddy from other states and misuse of the MSP with the connivance of rice mill owners and agents have been reported in Punjab and Haryana. All the strict rules laid down by the government are proving futile.

Punjab Food and Civil Supplies Minister Bharat Bhushan Ashu said that the department had deployed flying squads to prevent misuse of MSP. “The squad has taken strict action to stop misuse of MSP on paddy being brought from other states,” the minister said after news of the farmers’ scandal broke out.

The food and supplies minister of Punjab said that so far, 11 FIRs had been registered against 30 agents and rice mill operators. Besides, he said, 4695.20 quintals of paddy had been confiscated.

Ashu said that the Punjab government was committed to buying every grain of paddy from the farmers of the state, “but no one can be allowed to buy and sell it cheaply from other states to Punjab”.

Releasing the figures of procurement of paddy, the minister said that it had crossed 100 lakh metric tonnes. Till now, the government has paid Rs 15,986.27 crore to the farmers for their produce, the minister added.