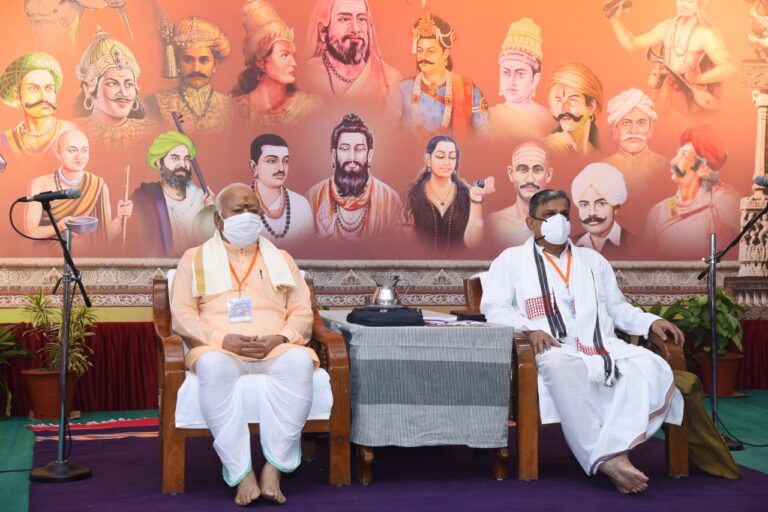 In this meeting RSS Sarsanghchalak Dr. Mohan Bhagwat ji, Sarkaryavah Shri Dattatreya Hosbale ji and about 350 Karyakartas from all over the country, including Prant Sanghchalaks, Karyavah, Pracharaks, Akhil Bharatiya Karyakarini Members and All Bharat Organizing Secretaries of some organisations are participating. The meeting will conclude on October 30th.

RSS ABKM has passed its resolution on the recent violence on Hindus in Bangladesh.

Below is the full text of Resoluton:

The Akhil Bharatiya Karyakari Mandal expresses its deep anguish over the recent outburst of violence on Hindus in Bangladesh and also strongly condemns the continuing brutality on the Hindu minority there, which is the part of larger conspiracy by Jihadi groups to further Islamisation of Bangladesh.

The spate of violent attacks on Hindu minorities and Hindu temples continues unabated in Bangladesh. The recent slew of communal violence that erupted during the sacred festival of Durga Puja left many innocent Hindus killed, hundred’s others injured and rendered thousands of families homeless. Several girls and women belonging to the Hindu community were assaulted, Temples and Durga Puja pandals were vandalised in a span of two weeks.

Arrests of some of the accused, who spread fake news to incite communal frenzy in society, brought to light that the attacks were a well-orchestrated conspiracy of the radical Islamists. The frequent and targeted attacks are clearly a systematic effort to exterminate and uproot Hindu minorities whose population has witnessed a steep decline ever since the partition of Bharat.

About twenty eight percent of the population of East Bengal was Hindu at the time of partition, which dwindled to about eight per cent now. The atrocities by radical Islamist groups like Jamaat-e-Islami (Bangladesh) had resulted in large scale migration of Hindus into Bharat since partition and specially during the 1971 War. Those outfits still continue to vitiate the communal harmony in Bangladesh creating insecurity in the minority Hindu population there.

The ABKM is of the view that the Government of Bangladesh should take stringent measures to prevent the mounting incidents of violence against the minorities in their country. The Government should also ensure that the perpetrators of anti-Hindu violence be handed severe punishment so that the Hindus will be assured about their secured dignified life availing their rights in Bangladesh.

The ABKM decries the deafening silence of so-called human rights watchdogs and UN affiliated bodies and calls upon the international community to come forward in condemning the violence and raise their voice for the safety and security of the Bangladesh Hindu, Buddhist and other minorities. It also cautions that the rise of radical Islamist forces whether in Bangladesh or in any other part of the world will be a grave threat to democracy and human rights of the peoples of peace-loving nations of the world.

The ABKM also appeals to the Government of Bharat to use all available diplomatic channels to communicate the concerns of the global Hindu community and organisations to the Bangladesh Government over the attacks and human rights violation in Bangladesh to ensure security of Hindus and Buddhist there.

The ABKM places on record its acknowledgement to the Hindu organisations and institutions like ISKCON, Ramakrishna Mission, Bharat Sevashram Sangh, VHP and others for standing by the victims of the Islamist violence and extending all support to the Hindu brethren of Bangladesh. We also assure that the RSS along with the entire Hindu society stands firmly by the Hindus and other persecuted minorities of Bangladesh in this challenging and difficult time.