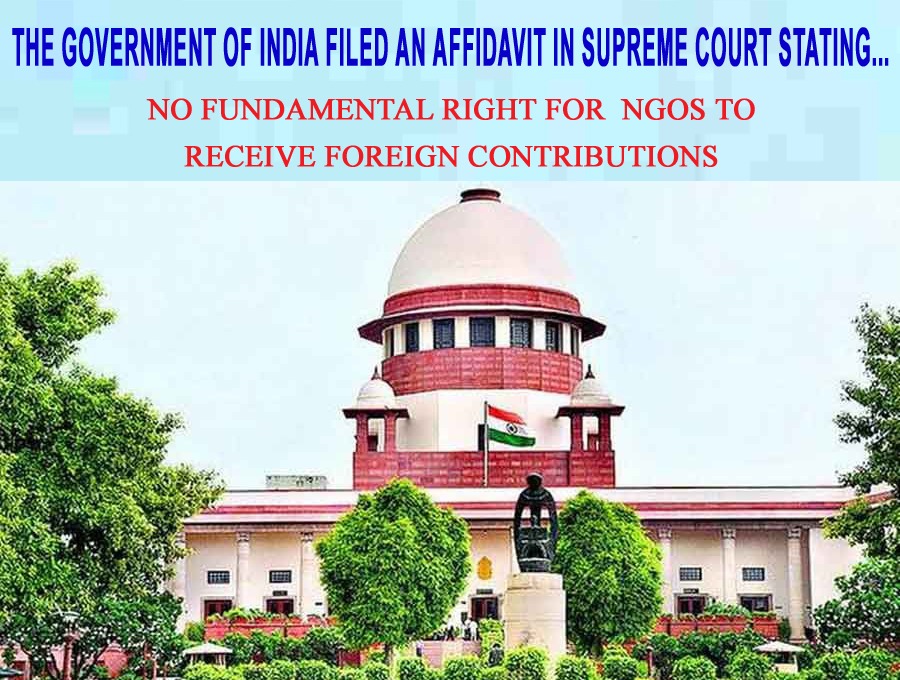 The Supreme Court of India was hearing a batch of writ petitions challenging various amendments made to Foreign Contribution Regulation Act (2010). The amendments were duly passed by Parliament and notified on 28 September, 2020.

Some of the important amendments made were:

1) Section 7 of the above act was amended to read as:

3) Mandatory opening of account with State Bank of India, New Delhi Main Branch for receiving all foreign contributions. The NGOs were permitted to open additional accounts anywhere in India and transfer funds from the designated account to these accounts for operational convenience.

5) Renewal of licence will be subject to enquiry and no automatic renewal.

6) If licence is surrendered or not renewed, all assets of the NGO will vest with Govt. of India’s designated authority. Assets will be restored to NGO upon renewal or completion of enquiry

The petitioners argued that the amendments made to the FCRA Act, 2010 would make the functioning of the NGOs difficult and seriously impede their development and service activities and sought quashing of the said amendments. While some of the amendments would have a one time impact like the stipulation for opening designated account in SBI, New Delhi, the restrictions on transfer of FCRA funds to other FCRA registered NGO’s has caused considerable consternation amongst NGOs.

In response the affidavit filed by GOI said:
“The petitioners or any entity/NGO has to utilise it for the purposes for which it has been given a certificate of registration or prior permission by Government and hence such a ban on transfer is not discriminatory. This amendment was necessitated since it was becoming difficult to monitor the ultimate utilisation of the foreign contribution by the transferee. This would potentially allow endless chain of transfers and create a layered trail of money, thus making it difficult to trace the flow & utilization of foreign contribution. This creates serious vulnerability for misuse and diversion of foreign contribution“

Over a period time, a breed of super FCRA NGOs have come into existence who do not do any kind of field activity but maintain plush offices in prime real estate in metro cities. From here they pass on their FCRA receipts to other NGOs who may either carry out the developmental or service activity or pass on the receipts to another FCRA NGOs. This is precisely the reason for which the amendment to Sec. 7 was brought in.

For example, the 2019-20 annual report of OXFAM INDIA lists 96 organisations as partner organisations which have received FCRA funds from them.

In 2018-19, another NGO, National Foundation For India  transferred Rs. 8.55 crores to 170 NGOs out of total FCRA contributions of Rs.5.77 crores which included transfer from another local FCRA NGO to the tune of Rs. 2.74 crores.

Such a huge volume of cross transfers were making it difficult for Govt. of India to monitor the activities of these NGOs as well as the end use of the funds for donor designated purposes.

On the issue of mandatory Adhaar/ PIO identification for office bearers and directors, Govt. of India affidavit said:

“The Aadhaar numbers of the office bearers, key functionaries and members would facilitate proper identification of person and associations with which the persons are connected for facilitating monitoring of activities of associations which should not be detrimental to the national interest and hence the restrictions are reasonable and proportionate.”

As per the erstwhile section 17 of the Act, all these NGOs could receive foreign contribution in an exclusive bank account of their choice in any bank in India. As these FCRA accounts were opened in hundreds of branches spread across the country, massive difficulty was being experienced in monitoring of inflow & outflow of foreign contribution from these accounts and also during audit process, the government also said that the Home Ministry and the State Bank of India have put in place a system to enable the NGOs to open the main designated FCRA Account in SBI, New Delhi Main Branch without any need to physically come to Delhi. The affidavit said that close to 22,600 associations are registered under FCRA and about 19,000 FCRA accounts have already been opened at SBI, New Delhi Main Branch.