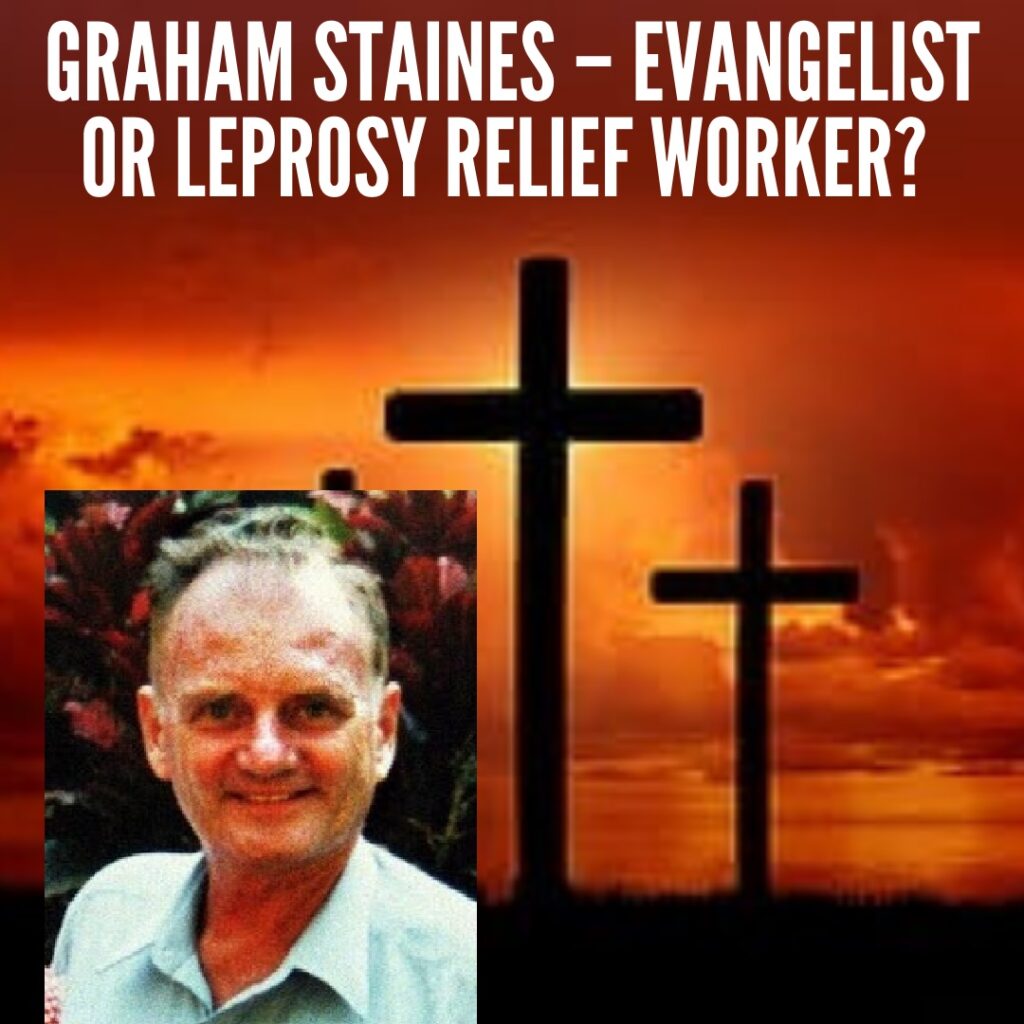 – An Exclusive Report by CSIS

(This article is based on the dispatches sent by the late Graham Staines and Ms Gladys Staines to an Australian missionary magazine named ‘Tidings’. Part of the dispatches are covered in the Justice D.P. Wadhwa Commission of Inquiry report dated 21st June, 1999 and rest of the despatches were sourced by our team of researchers)

‘Tidings’ is a newsletter published from Australia by Australian Missionary Tidings. It is a monthly publication and contains “Missionary Mail” from various countries from all over the world.  Despatches sent by Mr. Graham Staines and his wife Ms. Gladys Staines were also published in each issue of the Tidings. From two of the despatches of late Mr Graham Staines that his team of Christian evangelists and Missionaries were involved in the above activity. In fact Mr Staines was very happy that record sales of Bibles and Christian books took place. Both in 1997 and in 1998, World famous Jagannath Chariot festivals (popularly known as Rath Yathra) were targeted for Bible tract distribution and sale of Bibles & Christian literature. Such a sale/distribution of Christian literature in an important Hindu festival may not be illegal but certainly not moral. It may not be out of place to mention that the fundamental right to practice and propagate one’s religion as guaranteed by Article 25(1) of the Constitution of India is subject to ‘Public Order, Morality and Health’. This act of late Mr. Graham Staines certainly fails the ‘Morality’ condition of the fundamental right.

Praise God for answered prayer in the recent Jagganath car festival at Baripada.A good team of preachers came from the village churches and four OM workers helped in the second part of the festival.  There were record book sales, so a lot of literature has gone into people’s hand. Pray for a man named Surja Singh who bought a Bible. He first heard the gospel in his home village in 1989.  He told others to follow Christ, but did not do so himself.  For some time he had been wondering where he could get a Bible to read again about the Lord, who he believes is the only one who can deliver him from the fear of evil spirits.”

The scriptures have been put into hands of the people through books sold and tracts distributed at the recent Jagganath Car Festival. Pray for God’s word to bear fruit in the lives of those who have received them. Despite the extreme heat 120 children attended the Raika Vacation Bible School in June. Pray for the staff of the leprosy home. Some come to work very late and do not seem to have as much interest in serving the Lord as they used to. The despatches of late Graham Staines repeatedly talk about evangelist activities especially in jungle camps. Accurate figures of those attending the camps, activities like Bible preaching and baptisms find repeat mention in most of the despatches. The motivation of the tribals and rural folk to abandon their ancestral faith and convert can be gauged by testimonies of two converts mentioned in the Commission report. Both the witnesses mention ‘magic/miracle cure for health issues’ and ‘getting rid of fear of spirits’ as their prime motives for conversion to Christianity. It is possible that the tribals were told of miracle healing powers of Jesus Christ in the jungle camps. One of the witnesses testified before the Commission that he reverted to Hinduism as his problems were not solved through the miracle cure of Jesus as promised to him earlier. However, the Justice D.P.Wadhwa Commission of Inquiry concluded that monetary incentives were not given for conversion to Christianity.

The first jungle camp in Ramchandrapur was a fruitful time and the Spirit of God worked among the people.  About 100 attended and some were baptised at the camp. At present Misayel and some of the church leaders are touring a number of places where people are asking for baptism.  Five were baptised at Bigonbadi. Pray for the Etani Trust in which the mission properties are vested.  One man managed by underhand means to get parts of the properly in his own name and a number of nominal Christians of the Baripada church are also trying to get some of this valuable property for themselves.  The Trust is having to take legal action to rectify this.”

Praise God we now have the Ho New Testament in Oriya script and many copies are now in the hands of the Ho people.  Pray that it will be used by God to speak to many as they read his word in their own language. The wife of Surga Singh, the new believer from the Car Festival, is also interested but it is a slow process for an illiterate mother to understand so much that is new.  Pray for them as they plan to move soon to Bhubaneswar and are concerned about finding fellowship and teaching there. The Ho believers in Thakurmunda still face persecution. From time to time the village people have beaten them up, broken their bicycles and not allowed them to worship in their own church building. Three people came to Baripada to meet district officials and petition for justice.  Pray that action will be taken to allow freedom to worship.

More than 160 ladies stayed at the camp held at Palasboni, and with them who came and went each day, there were up to 205 at the meetings. This is many more than last year. Pray for a continuing work of the Holy Spirit in the lives of these ladies through the word of God which they have heard. Jungle Camp means four days of Bible teaching, prayer and the fellowship of Christians living together. It enables believers from other churches to meet with local Christians to discuss experiences and encourage one another.  Also, speakers from other places broaden the vision of those whose lives have been confined to one small village.  The teaching helps the church leaders to further develop material for their own regular ministry.

The camp can also create hunger in the hearts of those who come just to observe.  Each camp has a bookstall, which for many is the only chance to buy Christian literature. The three camps held so far this year were well attended and others are to be held in the next few months. There are different needs in each place. Pray for wisdom for the leaders and responsive hearts in the people. One lady commented after reading some of the Ho New Testament – ‘God’s word is just so fresh and new to me as I read it now.  It was also encouraging to see so many Ho people following the references in the Ho New Testament during the messages at Sarat Jungle Camp. We sold all the New Testaments we took there.

As can be seen from the various despatches, the large scale organisation of Vacation Bible Schools and Sunday school for kids, exposure to Christianity of girls staying in Mission sponsored hostels are clear pointers that the team of evangelists led by late Graham Staines were imparting Christian religious education to minor children.

VIOLATION OF THE ORISSA FREEDOM OF RELIGION ACT, 1967:

The above act came into force with effect from 11th January, 1968. Rules were framed under the Act in 1989 and were in force during the time period in which late Graham Staines was working in the state of Orissa. From the Justice D.P.Wadhwa Commission of Inquiry it is clear that neither the team of late Graham Staines nor the district administration were aware of Act/ Rules of the above act nor did they make any attempt to follow the provisions of the Act. Thus it is beyond doubt that violations of the Orissa Freedom of Religion Act, 1967 for prolonged periods of time were carried on with impunity by the evangelist teams led by late Graham Staines. In his despatches, late Graham Staines made mention of baptisms multiple times. As per the above Act and rules framed thereunder, every event of baptism shall be informed to the concerned District Magistrate. But there is no mention of any such intimation by the late Graham Staines. Also the individual changing his religion has to declare his intention to do so to a Magistrate 1st Class of the jurisdiction concerned. The dispatches do not speak of any such declaration being filed.

A number of witnesses who testified before the Commission said that ‘Cure from Health Problems’ was the prime reason for conversion to Christianity. Does not the promise of Magic Cure upon conversion amount to ‘Fraud’ under the above Act?  In fact some of the witnesses reverted back to Hinduism when the promised Magic Cures did not materialise. Justice D.P.Wadhwa Commission of Inquiry recorded their dismay as follows:

“Both the District Magistrates and the Superintendent of Police also did not have a proper working knowledge of the Orissa Freedom of Religion Act and were not aware of the provisions of the Act and its rules.”

SOCIAL TENSIONS AND DISPUTES WITHIN THE CHRISTIAN GROUP:

The despatches of late Graham Staines and Gladys Staines speak of tensions in the villages, threats from trouble makers as also within the Christian groups on issues of church management and other issues. Land ownership, church administration led to internal squabbles and closing down of churches and the cancellation of Vacation Bible Schools.

There are many new believers in the Manoharpur church and the work is growing.  The devil is now finding an opportunity to hinder the work of God.  There is disagreement between the young people and the older men of the church.  A problem arose about the land on which the church is built and the planned Vacation Bible School had to be cancelled.  Last year more than 100 children attended this programme. The translation of Daily Life into Oriya is complete.  Pray for the checking of the text and that the printing will be done well and speedily. We have been told that a militant Hindu group plans to concentrate on Mayurbhanj and Keonjhar districts to turn Christians back to Hinduism.  Pray for wisdom, grace and steadfastness for all God’s children.”

In many churches here Sunday schools have ceased to function. I have been advocating these and at a recent church leaders meeting I heard that some have re-started this work.  It is often difficult to find the right ones to conduct Sunday school and mostly they have to do it without materials as very little is available.

The Vacation Bible School that was to be held in Manoharpur was cancelled because of problems in the church there.  Two hundred and eight children registered for the one at Raika, but because of the extreme heat only 120 came.  It was an excellent time and some young people who teach in VBS are being trained and encouraged for children’s work and Sunday school.”

It may not be out of place to mention that leprosy is a vanishing disease and in India,the number of active cases and new cases diagnosed each year have fallen steeply. The Annual New Case Detection Rate (ANCDR) has fallen steeply in the last 25 years.

Thus it is clear that late Graham Staines spent a considerable part of his time and energy in evangelist activities, church planting,  Bible translations, sale of Bibles, distribution of tracts and baptisms rather than leprosy work.

To sum it up, the late Graham Staines was more of an evangelist propagating Christianity amongst tribals and less of a Leprosy Relief worker. His activities violated The Orissa Freedom of Religion Act, 1967 multiple times over prolonged periods of time. Social tensions and communal strife followed his activities.

Further discussion on the Justice D.P. Wadhwa Commission report and other related issues can be found in Mr Arun Shourie’s blog.