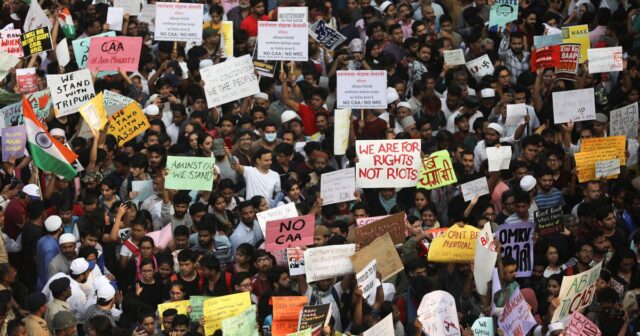 The global left agenda and their media nexus has tried very hard to instigate unrest and destabilize the country ever since 2014 when Modi Govt took over in the center. Many news outlets termed as the Lutyens lobby have been active in a single-minded Hate- Modi campaign. Analysts have often pointed out that Hate-Modi is just a cloak that hides the Hate-Hindu mindset. The prejudice against Hindus in the West is millennia old, is the Global Left elite tapping into it?

Global nexus of Left- Islamists and church conversion agenda is very active in India and has over the years actively prevented any questions being asked on national and internal security, Maoism, conversion racket of Christian groups, Islamist agenda including radicalization of youth. Some of these concerns are directly related to foreign funding and if the Govt seeks to probe any of these things, the Lutyens cabal immediately calls the Modi Govt `dictator, fascist’ etc. It is very strange that despite daily abuses, lies, and fake news against PM Modi or his Govt, the so-called `fascist’ Modi Govt has never taken any action against any of the fake news outlets.

A determined motivated lobby which consists of a section of media, a few in the academia, some lawyers, some retired bureaucrats, and retired armed forces personnel have been in the forefront to malign the govt of the world’s largest democracy. In recent times, it is clear that several stories planted in media against India, Hindus, and Modi govt have been sponsored by certain agencies abroad. This agenda-driven group is generally being termed as the `Global left’ funded by agencies like CCP of China and individuals like George Soros.  George Soros has publicly promised to invest billions of dollars to dislodge PM Modi. This left cabal has struck gold with President Donald Trump who got derailed by their misinformation campaign. The campaign is to oust Modi and install a pliant Govt where this lobby enjoys a free run in the strategic and internal affairs of the country.

India has been witnessing unprecedented protests over some issue or the other, whether it is a global campaign against CAA 2019, which is an amendment to the existing legislation to protect Hindus and other persecuted minorities in Pakistan, Bangladesh, and Afghanistan; the lobby has unleashed a massive funded orchestrated campaign globally.  Due to this, thousands of people paralyzed public life in India which also affected the livelihoods of lakhs of people for months on, and the protesters abused PM Modi and even threatened to kill him. In the year 2020, protests have started against the extremely progressive and development-oriented Farm Laws, which would unshackle the farming sector and provide succor to crores of farmers in the country. The anti-development lobby adopted the same modus operandi of seizing public roads, paralyzing public life, and harming public interest as well as the will of the people. In both instances, the Indian judiciary acted inadequately which allowed the free run of extremist elements.  In both instances, the protests of vested interests have been sponsored and funded by elements inimical to India, often from abroad.

A recent example is the Newsclick case where the ED is probing the alleged fraudulent infusion of the foreign fund to the tune of Rs 38.05 crore during a short span of three years April 2018 and March 2021. Businessman Nivelle Roy Singham, a close associate of NewsClick Editor-in-Chief Prabir Purkayastha and front-man of Communist Party of China, is the real owner of the fund of Rs 38.05 crore which was infused in PPK NewsClick Studio Pvt Ltd.  Digital evidence has proved that Purkayastha and his associate journalist are working on various projects of CPC China which includes enhancing the image of China in support of several Chinese actions. Purkayastha and Gautam Navlakha incorporated a company along with an existing defense supplier, M/s Sagarika Process Analyst Pvt Ltd with the help of investment received from M/s Viking Systems International Inc USA, a company engaged in the business of military and naval supplies. The reason and source of the investment in the incorporation of the company are not disclosed during the interrogation.(https://www.republicworld.com/india-news/law-and-order/newsclick-investigation-details-accessed-top-left-leader-named-in-email-exchanges.html).

Many media portals in India in fact actively suppressed the above news.

So what is the source of foreign funding of some media channels in the country known for their anti-India, anti-Hindu, anti-Modi stance which they pass off as `freedom of expression’. For many years now, unaccounted anonymous Fluid Money is coming from dubious sources into Indian digital media, and these very media outlets abuse and vilify the govt if it seeks to investigate dubious money.

The lobby’s latest ploy to target Modi Govt is the Israeli Tech Surveillance Firm NSO’s spyware Pegasus with which allegedly Modi Govt is spying on 300 persons, it is laughable that the alleged names in the list include Govt’s own ministers, some staff like secretaries, a few opposition leaders, and other obscure names. According to French NGO `Forbidden stories’ and the `Amnesty International’ unsubstantiated stories, 50000 persons across the world are under surveillance for which they give no supporting evidence, between 2017-19. It is significant that among the countries named in the report, 95% are despot regimes and only India is a thriving democracy. The NGOs themselves say their report is inconclusive and Israeli tech firm NSO has threatened to sue them. The same Amnesty International in India floated a company unlawfully to receive foreign funding in India and has diverted nearly Rs 30crores to stoke protests in J&K, and against nuclear plants, etc.

The above are only two recent examples, among a series of Global-toolkit manufacturers out to malign India. Govts all across the world procure spyware to protect their own nations, and Indian govt has the same responsibility to arm Intelligence agencies with spyware and other dark-ware to put terrorists, drug traffickers, Maoists, jihadists under surveillance. Undaunted by the Global Left defamation campaign and baseless allegations, Govt of India needs to arrest and prosecute individuals and agencies who are out to defame and derail India from within and without.

However, the important question is what is the Global-left elite’s motivation in defaming, dominating, and derailing India? It cannot be money and commercial interests, from a developing country like India (although India in the next decade or so is poised to become a very large economy), and the left lobby is even publicly declaring its will to pour in money to destabilize the country, dislodge the elected govt and flout the will of the people in the world’s largest democracy. Why is controlling the entire world, and establishing left hegemony important to the Global-Left elite?