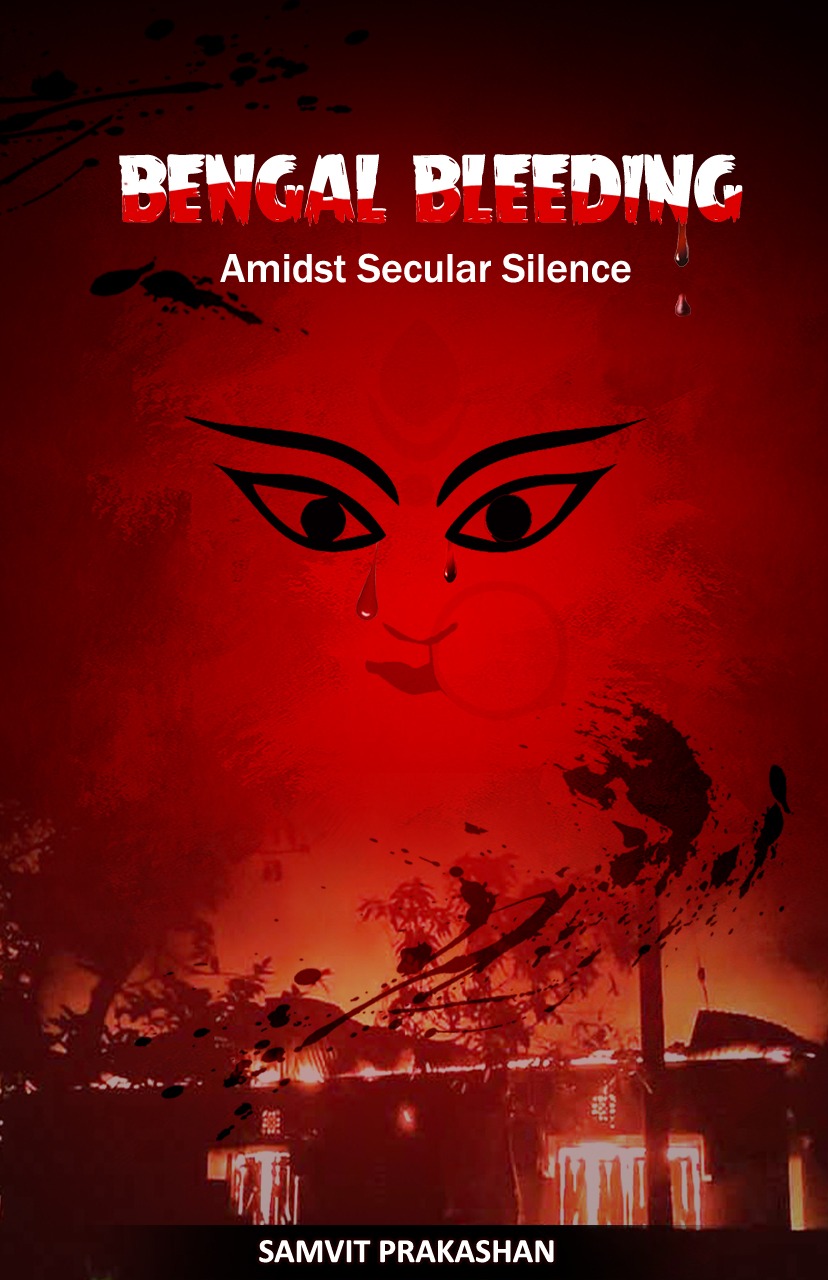 Samvit Prakashan’s new publication `Bengal Bleeding’ is not only a timely read, it presents the hitherto hidden reality of Jehadi politics, specifically in Bengal both before partition and after, in East Pakistan, Bangladesh and West Bengal today. It is a moving and heart-rending historical account of Bengal’s political trajectory. The book is also a sharp reminder that the poll-related violence that was witnessed in West Bengal during Assembly elections 2021, during the run-up to the elections, and especially after the results have been declared, was not just a sporadic event occasioned by high tempers, but followed a clear scheme of perpetrating violence, in targeting its victims with deliberation and brutality.

The book clearly establishes that the Islamic jehad unleashed in the 1940s, was never called off, resulting in cultural, ethnic cleansing and genocide of Hindus both before and after the tragic partition of 1947.  In East Pakistan, targeted violence continued against the Hindus, sometimes low-key, sometimes blatant and open, through 50s and 60s, until the great Genocide of Bengalis and Hindus in 1971 that led to the formation of Bangladesh.  Millions of Hindu refugees crossed the porous borders and landed on the Indian side of the border.

The much-hyped Nehru-Liaqat Pact was a dead letter as jehadis continued to kill, rape, victimize and drive away Hindus, usurping the lands and assets of better-off Hindus who took refuge in India.

Well off refugees took shelter with their families, Bhadralok refugees of the first wave were settled in Bengal, but the chhotolok who had nothing were exiled to Dandakaranya forests, languishing in the periphery completely ignored, erased from the national conscience, while thousands who sought a life close to Bengal were massacred in Maricchjhapi. The Hindu victims of jehad from across the border were subjected to shocking neglect and ill-treatment in the land of their culture and religion. The CAA is a much belated and a small effort to redress this great wrong to our people.

The myriad forms of jehad include economic boycott, discriminatory pricing, administrative and judicial discrimination, crowd violence and intimidation, desecration of religious places, mob pressure to convert, usurpation of properties and lands, physical assaults and killing, and sexual humiliation of Hindu women. Some of these forms are chronicled in the book with ample referencing.  One repulsive feature of jehadi violence then, as now, is the sexual assault on women, including disrobing them and brutal rapes in front of their families. The extensive evidence of this form of jehad adduced in the book spanning over half a century, should shake anyone with sensibility and conscience into combating the forces of jehad that are active in our country even today.

The book gives excerpts from the resignation letter written by Sri Jogendranath Mandal, the first Law Minister of Pakistan, to his PM Liaqat Ali Khan, in which he graphically describes the plight of Hindus who were hounded and killed by Jehadis, and says that it is morally untenable for him to continue as Minister. He later migrated to India and inexplicably stayed silent throughout his life. The book has chapters from Sri Tathagata Roy’s book `My People Uprooted’ in which Sri Roy brilliant expounds panoramically on the pre and post partition saga of riots and violence against Hindus while also explaining his struggle to find any written material for his book. He eloquently explains the eerie silence that enveloped the Bengali literary, journalistic and academic world, which over a time completely obliterated the tragic story of Hindu Genocide, while it is still in the living memory of millions of Hindus! Even his own family which had roots in the then East Bengal brushes it aside, and the normally vocal protesting rebel Bengali only has deafening silence as a response to the millions of Hindus who were killed, persecuted, uprooted and forced to flee from East Bengal which became East Pakistan and is now Bangladesh.  Sri Roy searched far and wide to find material to piece his story together. It’s a fascinating read to understand Sri Roys’ analysis of the myriad but typical responses that an average educated Bengali would proffer on the widespread collective amnesia in Bengal regarding the silence to Hindu genocide, even as sporadic violence erupted multiple times in recent years, and even as Hindus continue to be killed and persecuted in Bangladesh.  He contrasts this Indian silence on Hindu Holocaust to the Jewish Holocaust, where Jews have never forgotten the genocide and kept the collective memory alive, not only of Hitler’s Germany but the past genocides from millennia as well.

The book establishes the premise for understanding the vexed question of Partition amidst the violence and terror, the nature of Islamic jehad, and highlights the hidden but burning questions that are faced by nation and especially Bengal today, and also points out that the collective consciousness of the nation has to find the strength to attempt answers to those questions. The book also clearly warns that repeated Hindu genocides could potentially recur in a Hindu-majority country, if the nation continues to be afflicted with a collective amnesia regarding the many challenges that Hindus are faced with.

The important and slim book has been compiled by Centre for Integral Research, Samvit Kendra and efficiently edited by Dr Rahul Shastri. It is commendable that Hyderabad-based Samvit Prakashan has established it’s footprint in publications in a relatively short period of time by bringing out valuable editions which require wider circulation and debate across the country, especially among the youth, in media and in universities. The book is available on Hindu eShop, Amazon and Flipkart