Unabated infiltration, demographic change, radicalisation through Saudi-funded madrassas and appeasement politics are pushing Bengal into communal cauldron. Call for separate ‘Mughalistan’ and establishment of Sharia system is getting louder. As American journalist Janet Levy predicted, Bengal could be heading towards a civil war.

World’s second large demographic nation India’s state West Bengal is now apparently residence of over 91 million population. West Bengal is the fourth-most populous State and stands at. To get an insight into the present situation of West Bengal anyone has to look back in 1947 and later consequences. As being a prominent ethnocultural region of India, West Bengal faced political partition in the year 1947 in the wake of the transformation of British India into two separate independent nations India and Pakistan. Under the process of partition, the then Bengal province was bifurcated into two segments. The predominately Hindu living area named West Bengal, a state of India, and the predominately-Muslim living area turned as East Bengal and after becoming a province of Pakistan that renamed as East Pakistan and later in 1971, the Muslim-majority country of Bangladesh.

In 1971, at the time of partition, the Muslim population of West Bengal counted 12 per cent and the Hindu population of East Bengal remained 30 per cent. While at present, with continuous Muslim immigration, Hindu persecution, conversions, and less production of offspring, West Bengal’s Muslim population has increased to 30 per cent (up to 63 per cent in some districts). While as per the counting report of 2011 Bangladesh’s Hindu population has decreased to 8 per cent. When at the present situation for Hindus in Bangladesh is certainly dire, then life has become increasingly difficult for Hindus in West Bengal, having a Muslim-appeasing Government. The governance of the elected Government led to the demographic and cultural shifts in West Bengal. Prevailing of the same governance after the 2021 Vidhan Sabha election leads to the destruction of Hindu’s belonging everywhere in Bengal. The situation stood worse in the outskirts where media coverage is poor, compelling Hindu families to flee in adjacent States or to hide. A sizable number of Bengali Hindu families already preferred to shift to Assam.

American journalist Janet Levy has written an article in which she predicted that Bengal will soon become a separate Islamic country. Levy claims civil war is going to start soon in Bengal after Kashmir

Looking back as per astriking report of July 2014 by Times of India fewer children were born in Bengal and the prediction was there will be even fewer in the next generation. The 2011 Census shows a decadal growth of 13.84 per cent in West Bengal, which was significantly below the national growth average of 17.7 per cent, and the decadal growth was lowest ever and beaten only by the aftermath of the infamous Famine of Bengal, 1942.

While the retrospective study of the demography of West Bengal shows that the culturally dominant Hindu population in West Bengal during the first census of 1951 was around 19,462,706 and in the 2011 census it had increased to 64,385,546. While the percentage of the Hindu population in the State decreased from 78.45 per cent in 1951 to 70.54 per cent in the 2011 Census. The data sharply indicates fewer children birth within families of Hindus only while the population of Muslim counterparts tends to grow over time. Once considered a symbol of Indian culture, what has happened in Bengal for the last few decades is the indicator of West Bengal’s demographic future.

Starting from the diminishing of the Hindu culture, communal riots against the Hindus have started happening for quite some time and the situation has been that the banning of celebrating the festivals of Hindus has started in the last few years. Added to those the recent genocide of Hindus depicting a recent trend of population.

Back in 2015, the famous American journalist Janet Levy has written an article on Bengal and the revelations that have been made in it state that Bengal will soon become a separate Islamic country. Janet Levy claims in her article that civil war is going to start soon in Bengal after Kashmir, which has almost begun in recent times in the wake of the Vidhan Sabha election of West Bengal.

Ushering the prediction of Janet Levy Hindus will be massacred and demanded a separate country. She cited the facts for her claim back in 2015 that the Chief Minister of West Bengal has recognised more than 10,000 madrassas which are privileged to receive funds from Saudi Arabia and made their degree eligible for a Government job, money comes from Saudi and in those madrassas, Wahhabi bigotry is taught.

In the recent past, the Chief Minister started several Islamic city projects where Islamic people are taught also started a project to establish an Islamic city in West Bengal. It’s evident that Chief Minister has also declared various types of stipends for the Imams of mosques but no such stipends were declared for Hindus primarily. Janet Levy has given many examples around the world where terrorism, religious fanaticism, and crime cases started increasing as the Muslim population increased. With increasing population, a separate Sharia law is demanded at such places, and then finally it reaches the demand of a separate country.

Author and activist Taslima Nasreen once became a reason to test the ground reality for West Bengal. In 1993, Taslima Nasreen wrote a book ‘Lajja’ on the issue of atrocities on Hindus in Bangladesh and forcibly making them Muslims.

After writing the book, she had to leave Bangladesh. The author settled in Kolkata considering that she will be safe there as India is a secular country and the Constitution also provided the freedom of expression. Eventually experienced the nightmare that Taslima Nasreen had to face a riot-like situation against her in 2007 in Kolkata. Even in a secular country like India, Muslims banned Taslima Nasreen with hatred. Fatwas issued to cut her throat on the secular land of India.

Upholding the threat the author was also attacked several times in different cities of the country. But the secular Leftists never supported Taslima, not even the Trinamool Government of West Bengal because the Muslims would get angry and the vote bank would face shaking.

That time first attempt was made in which Muslim organisations in West Bengal demanded the Islamic blasphemy law, raising questions on India’s secularism and action of secular parties.

Janet Levy further wrote that for the first time in 2013 some fundamentalist Maulanas of Bengal started demanding a separate ‘Mughalistan’. In the same year riots broke out in Bengal in which houses and shops of hundreds of Hindus were looted and many temples were also destroyed by rioters under the safe shelter of the Government and police. After the 2021 Vidhan Sabha election, the Hindus of West Bengal have been facing the same or even worse situation.

Victorious party supremo of West Bengal was afraid that if the Muslims were stopped they would get angry and would not vote and after getting freshly elected her government falls into that vicious circle again. 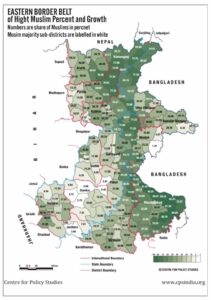 It is evident from the aftermath of the election result in West Bengal that not only riots but to drive away Hindus, in districts where there are more Muslims, boycotting Hindu businessman. In the Muslim majority districts of Malda, Murshidabad, and North Dinajpur, Muslims do not even buy goods from Hindu shops. This is the reason why a large number of Hindus have started migrating from West Bengal like Kashmiri Hindus, here Hindus leaving their homes and businesses and moving to other places. These are the districts where Hindus have become a minority.

Invoking such incidents Janet, stated that the demand for partition of Bengal from India will soon begin from the land of West Bengal. No demographic theorist interpreted the present demographic situation of West Bengal sabotaging Malthusian theory.