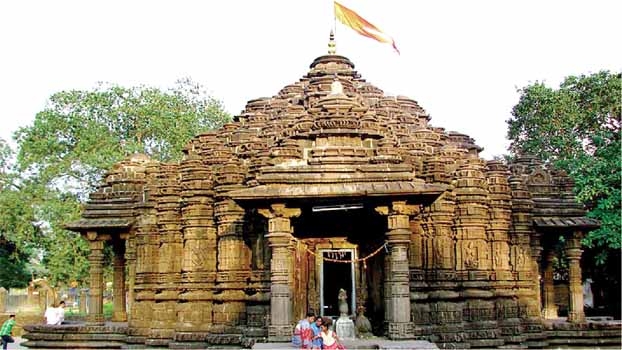 Ambareshwar Temple at Ambernath near Mumbai is a historic temple that is blessed with wonderful architecture. Despite years of neglect, one can see various idols of Shiva here. This temple in Maharashtra has been built in Bhumij style. This intricately carved Shaivite temple has three garbha grihas

The Yadav dynasty ruled Maharashtra from 9th to 14th century. Very rich, prosperous and art-loving, kings of this dynasty built beautiful, sculptural temples during their reign. One such temple stands in the village of Zodge on the Mumbai-Agra highway. The temple of Mankeshwar Mahadev in the village of Zodge, 30 km from Malegaon, is very beautiful but neglected. This temple is very spectacular and intricately carved. There is a square court in front of this west facing temple and a beautiful idol of Nandi is placed there. The temple has got three garbha grihas, thus it is also called a ‘tridal’ temple.

According to Vaastu shastra this temple is Bhumij temple; since it is in Maharashtra it is Hemadpanti temple. The sculptures carved on the temple façade are stunningly beautiful. Since it is a Shaivite temple, various idols of Shiva can be seen on it. Shiv murti of ‘andhakasur vadh’ is simply adorable. Various other statues of ‘sursundari’ in different poses and with various musical instruments are also there. A terrifying sculpture of Chamunde is also amongst these sculptures.

With the treasure and variety of its sculptures this temple is located in a secluded place and is totally deserted. It is time that authorities paid attention to the care of the temple.

Ambareshwar Temple at Ambernath near Mumbai is also Bhumij style but called Hemadpanti, though this temple was built about 200 years prior to the reign of Hemadpant. All Hemadpanti temples are known for beautiful sculptures on the façade of the temple along with the typical Shikhar design with rows of Urushringas on the outer surface of the Shikhara.

The Hemadpanti style of construction of the temples was peculiar. Ruins are available to scholars today for study and research. Typically, the stones used in building construction are designed and placed in such a manner that they can fit together by cutting in different angles into pegs and grooves, without filling them with lime or mortar. Construction of the temple from bottom to the shikhara by mere interlocking of stones is not only marvelous, harmonious, soothing, pleasing , beautiful but is also sustainable and time tested.