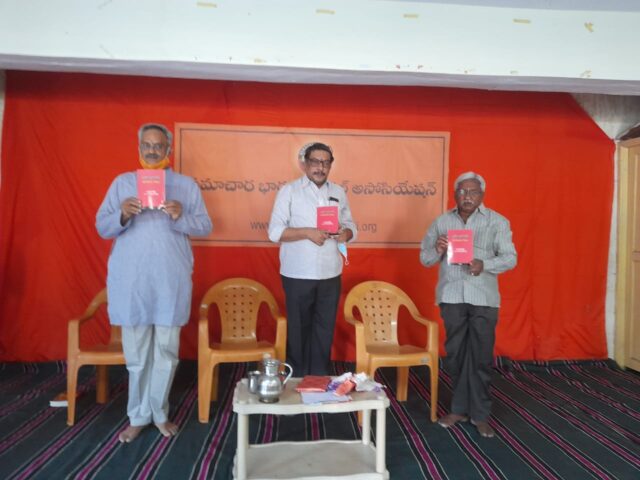 “Understanding and analysis of Indian Muslims’ active role in pre-Independence Khilafat movement in the 1920s should be subject matter for discussion among common people, to know and expose today’s nefarious designs of separate Muslim identity politics and its promoters”, said Sri Kalyana Chakravarati, a member of Samachara Bharati, at the book launch of “Khilafat : Muslim Verpatuvadam – Desha Vibhajana” at Gowlipura, Hyderabad on 21-March.

Samachara Bharati, a city based NGO, organised the book launch of “Khilafat – Muslim Verpatuvadam – Desha Vibhajana”. This Telugu publication of the Samvit Prakashan, is a translation of series of Marathi articles written by Dr Srirang Godbole on Khilafat. The foreword for this book is penned by Padmasri awardee Dr Hanuman Chowdari. Sri Kothakoti Prithviraj, RSS Charimnar Bhag Sanghchalak, was also present on this occasion.

Fight to restore the Khalifa in Turkey in early 20th century was nowhere connected with Indian Muslims, but Islamic religious leaders thought this was an opportunity to regain power from the British whom they accuse of toppling the last Mughul emperor Bahadur Shah Zafar in 1857 ending their rule, Sri Kalyan added.

Sri Ayush, Secretary of Samachara Bharati, said Congress endorsement and attempts to convince Hindus to participate in Khilafat movement in India was the key decisions that impacted the national politics in the Freedom Movement. As time progressed, this movement and ideology has nurtured the separate Muslim identity politics leading to the division of Bharat in 1947.

He also cited that “Dr Ambedkar clearly stated that the Muslim brotherhood is exclusively limited to Muslims only, and they always attempt to convert the land of Dar al-Harb to Dar al-Islam and Indians should be cautious in dealing with separate Muslim identity politics.“

The book consists of

Get copies of the book at Sahitya Niketan, Barkatpura, Hyderabad
Or Order online at link below :