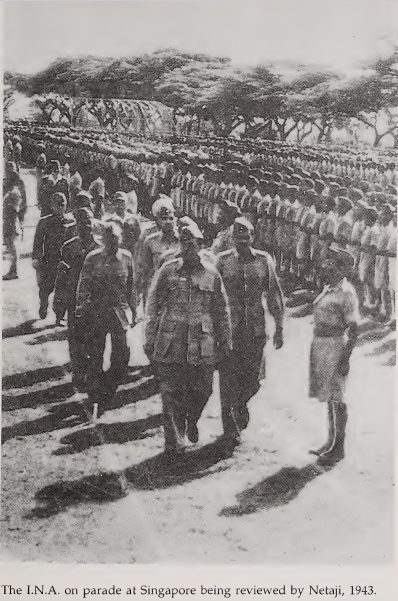 March 18, 1944 will remain a red-letter day in the annals of the Indian National Army (INA) I.N.A. for on that memorable day the I.N.A. crossed the border and stood on the sacred soil of India. This historic event was revealed to the world in a dramatic announcement by Netaji at a press conference on March 21.

The twenty-first day of every month has become a sacred day for Indians in east Asia for on that day. In October 1943, Netaji proclaimed the establishment of the provisional government of Azad Hind in east Asia.

Freedom’s battle raged and the I.N.A. was now fighting on eight sectors of the Burma-India border, on the plains of Imphal and in the neighbourhood of Kohima. A detachment of the I.N.A. under Colonel S.A. Malik penetrated deep into Indian territory and planted the Indian national tricolour at Moirang in Manipur on April 14, 1944, thus symbolically liberating a bit of Indian soil from the British rulers. This spot where India’s tricolour was first planted on Indian soil by the I.N.A. has since been sanctified by a memorial constructed to martyrs of the Azad Hind Fauj (army). The complex is dominated by a bronze statue of Netaji and consists of a library, an I.N.A. museum and a spacious community hall.

Moirang has become a place of pilgrimage to future generations of Indians who wish to pay their respectful homage to the martyrs who laid down their lives in India’s second war of independence. Source: Story of the INA